The men's sabre fencing team of Kim Jung-hwan, Gu Bon-gil, Oh Sang-uk and Kim Jun-ho, who won the gold medal for the second Olympics in a row at Tokyo, is in the lead.

The fencers will appear on the variety shows "Knowing Bros" on JTBC and "Boss in the Mirror" on KBS, according to broadcasters Tuesday.

They have risen to stardom for their overwhelming performance throughout the tournament and their good looks.

In addition to them, other young Olympians, including archers An San and Kim Je-deok, and teen table tennis player Shin Yu-bin, are also getting bombarded with calls from producers of variety shows and even prime-time news programs.

An official from a Seoul broadcaster said producers are desperate to cast them to meet rising viewer demand for Olympic stars, who have captivated the country for over a week. 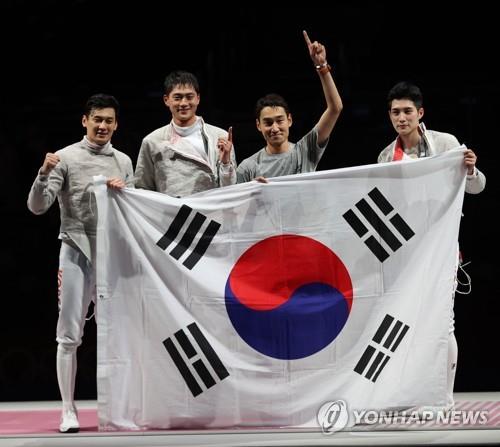