According to CEO Score, 17 percent of 852 former and incumbent CEOs of the country's top 500 companies by sales bought company shares between January last year and July 30 this year.

Those CEOs have bought 4.74 million shares worth 151.4 billion won (US$132 million) over the cited period, with their investment returns averaging slightly over 89 percent.

CEO Score said their stock purchases appear to have been brisk amid price tumbles shortly after the coronavirus outbreak in the country in late January last year.

Their share buying also seems to be aimed at showing their confidence in corporate performances and helping drive up undervalued share prices, it added.

The Hyundai Motor Group chief posted the largest valuation gain of 126 billion won as shares in Hyundai Motor and Hyundai Mobis shot up following plunges shortly after the coronavirus outbreak. 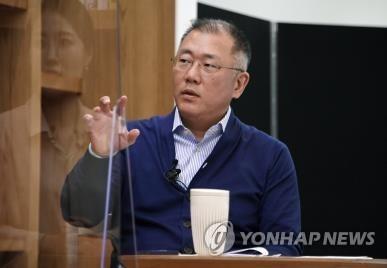