SEOUL, Aug. 4 (Yonhap) -- Foreign Minister Chung Eui-yong has asked the Association of Southeast Asian Nations (ASEAN) to back Seoul's efforts to foster a lasting peace on the Korean Peninsula after the recent restoration of inter-Korean communication lines, his office said Wednesday.

Chung made the remarks during Tuesday's virtual ASEAN Plus Three foreign ministerial meeting, which also involved China and Japan. Until Friday, the minister is set to join a series of virtual sessions led by the regional bloc, including the ASEAN Regional Forum (ARF).

"Minister Chung stressed that to make substantive progress in the efforts for the complete denuclearization of the Korean Peninsula and the establishment of permanent peace, diplomacy and dialogue is essential based on existing agreements between the two Koreas, and between the North and the U.S.," the foreign ministry said in a press release.

"The minister said he expects support from the ASEAN Plus Three for South Korea's efforts to continuously move forward the peninsula peace process on the occasion of the recent reactivation of inter-Korean communication lines," it added. 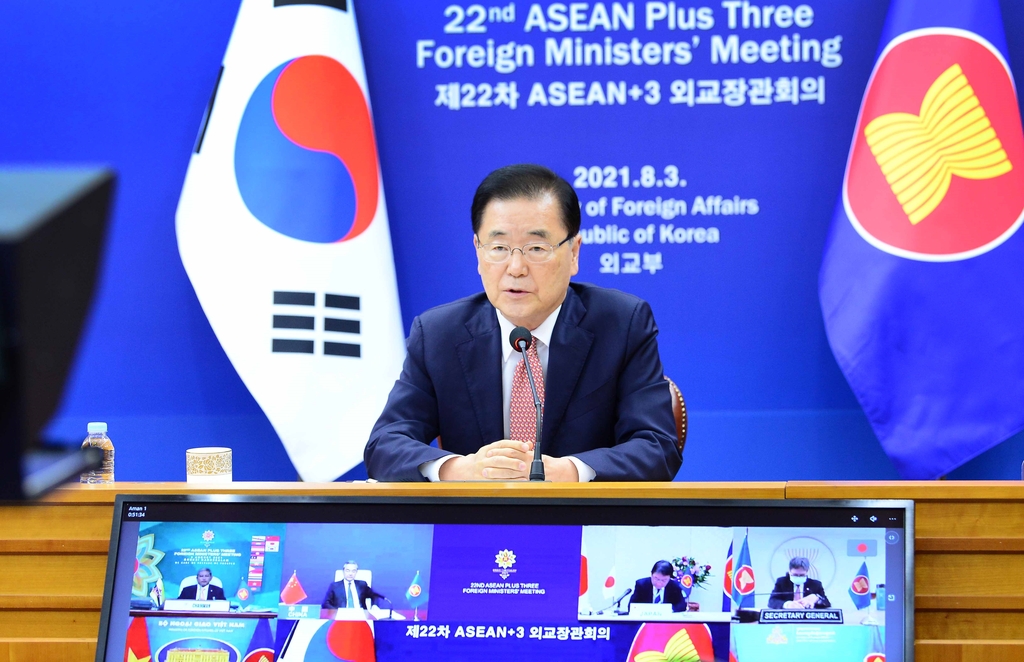 The restoration of the communication lines Tuesday last week raised hopes for the resumption of nuclear diplomacy with Pyongyang, though Kim Yo-jong, the sister of North Korean leader Kim Jong-un, warned Sunday the planned summertime military drills between the South and the United States will cloud the future of cross-border relations.

During the multilateral session, Chung also underscored the need for regional cooperation to strengthen responses to the spread of COVID-19 variants and build a more resilient regional health care system, the ministry said.

Chung also expressed Seoul's will to continue to participate in the discussions to pursue the formation of an ASEAN Plus Three reserve of essential medical supplies to cope with future global public health crises in a timely manner.