"Reopening the Kaesong Industrial Complex is very critical to building trust between the U.S., South Korea and North Korea," Rep. Song Young-gil, head of the ruling Democratic Party (DP), said during a session of the Aspen Security Forum, being held online by the U.S.-based Aspen Institute.

"The Kaesong Industrial Complex has a very essential role in easing tensions between the two Koreas and is a very efficient way to change North Korea," Song said.

His call for the resumption of the Kaesong complex comes amid growing hope for improved inter-Korean ties following the reopening of liaison communication hotlines between the countries last week.

The joint factory, a major symbol of inter-Korean economic cooperation, was closed in February 2016 in the wake of the North's nuclear and missile tests.

Song said U.S. investment in the joint factory, such as installing a McDonald's restaurant, could send a strong message that Washington is not hostile toward the North.

"It could be a strong symbolic sign that U.S. does not intend to invade North Korea," according to Song.

Reopening the complex would also provide "very strong momentum for inviting the North to the negotiating table for denuclearization of the Korean Peninsula" and reducing Pyongyang's growing dependence on China, he added.

"Since the 1995 normalization of diplomatic relations with the U.S., Vietnam is now a de facto military ally and deters the expanding Chinese power," Song said. "North Korea can become the second Vietnam. It's up to the U.S.," he suggested.

The chairman also said the North has not carried out any serious military provocations under the Joe Biden administration so far, but the country may go for a provocation at anytime, urging Washington to consider promptly providing humanitarian assistance to the communist country. 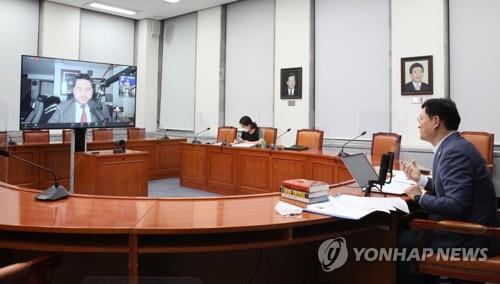