GWANGJU, Aug. 4 (Yonhap) -- A five-day funeral process began here on Wednesday for South Korean mountaineer Kim Hong-bin, who went missing in mid-July soon after becoming the world's first person with a disability to ascend all 14 eight-thousanders in the Himalayas.

Kim's funeral will be held at Yeomju Gymnasium in Gwangju, 330 kilometers south of Seoul, until Sunday, according to the city government.

Kim's memorial altar was set up on the first floor of the gym for mourners, with his mountaineering equipment and other personal belongings placed on the altar decorated with white chrysanthemums. 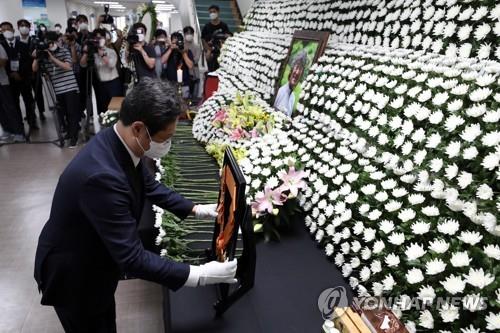 The 56-year-old Kim, who lost all of his fingers to frostbite about 30 years ago, made headlines after scaling the 8,047-meter-high Broad Peak located in the Karakoram Range on the Pakistani-Chinese border on July 18 to conquer the world's 14 highest mountains.

But he went missing at a location about 7,900 meters above sea level during his descent. Nearby climbers from Russia spotted Kim the following day but failed to rescue him as a rope broke. He reportedly fell further down. Rescuers halted their weeklong search for Kim on July 26 at the request of his family.

On Wednesday, Minister of Culture, Sports and Tourism Hwang Hee visited Kim's altar to award the Cheongryong Medal, the highest Order of Sport Merit, to the mountaineer.

"Kim gave courage and hope to the people exhausted from COVID-19. He is a hero who has left a meaningful gift to the world beyond achieving his personal goals," a mourner said.

Kim's portrait and mountaineering equipment will be enshrined in the charnel house of a Buddhist temple at Mount Mudeung, also in Gwangju, after a send-off ceremony slated for 10 a.m. Sunday. 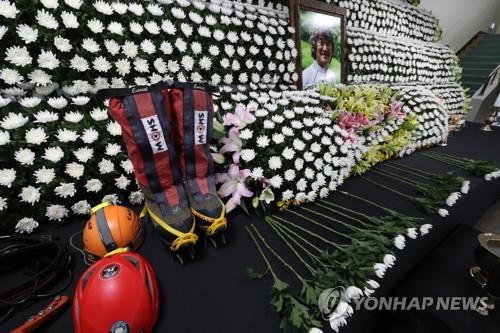