In a revised forecast on the BOK's rate policy, JP Morgan forecast the country's central bank could start its rate increase at this month's policy-setting meeting slated for Aug. 26.

The BOK is also likely to raise the country's benchmark interest rate once during the fourth quarter of the year with another rate hike in the cards in the third quarter of 2022.

Earlier, JP Morgan had projected the BOK to kick off its hawkish move in October.

As the minutes of BOK's July meeting show its policymakers appearing to prefer a rate hike in August, JP Morgan said it has advanced its forecasts for BOK's rate raises by one quarter. 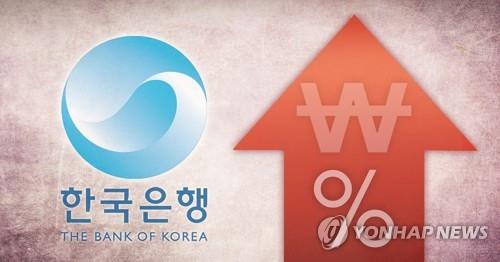 Yet uncertainty over the resurgence of coronavirus infections and its impact could come as a risk to the BOK's rate increase in August, the investment bank added.

In a monthly policy meeting on July 15, BOK's seven-member policy board held the country's key interest rate steady at a record low of 0.5 percent amid the fourth wave of the pandemic.

According to the minutes released Tuesday, board members assessed that Asia's fourth-largest economy is on a recovery track despite uncertainty due to the fourth wave of COVID-19, with inflationary pressure rising.

The local economy expanded 0.7 percent in the second quarter from three months earlier after rising 1.7 percent in the January-March period. The country's consumer prices gained 2.6 percent in July from June, accelerating from a 2.4 percent on-year gain the previous month.

In a separate forecast, the Woori Finance Research Institute projected the BOK to raise the key interest rate by 0.25 percentage point to 0.75 percent at this month's policy meeting.

"The BOK is estimated to carry out a rate increase in August in light of brisk exports and investments stemming from a global economic recovery, growing consumer spending, an expansionary fiscal policy and a financial imbalance linked to the housing market," said the institute affiliated with major lender Woori Bank.

But the central bank may delay its rate hike until October or November if the fallout from the current coronavirus resurgence has a greater-than-expected impact on the real economy, it added.
(END)