"As one of South Korea's citizens, I decided I can't just sit and watch the country crumble," Choe, the former chairman of the Board of Audit and Inspection (BAI), said, announcing his bid to run in the March 9 presidential election.

The official presidential bid was announced via an online event only about one month following his resignation as the head of the national audit agency amid a feud with the Moon Jae-in administration.

The BAI, under the leadership of Choe, had been at odds with Cheong Wa Dae since its controversial audit last year of the Moon administration's decision to close the Wolsong-1 reactor at an early date as part of the government's broader campaign to phase out the country's use of nuclear energy. 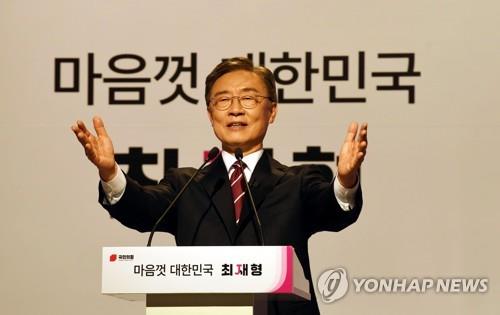 "Some ruling party lawmakers told me, while I was inspecting the validity of the early closure of the Wolsong-1 reactor, that I should resign and join politics if I do not agree with the president's philosophy, but I did not step back," Choe said of the background of his resignation.

"I thought doing my job in keeping with the law should be the way to show my love for the country."

Accusing the Moon administration of populist policies and wasting taxpayers' money, Choe vowed to steer the country closer to the principles of a free market economy if he is elected president.

"Based on the spirit of freedom and autonomy, as well as renovation and creativity, I will make a country where the principles of a free market economy run properly," he said.

He also pledged to "level the playing field" for young people to give them fair job opportunities.

"This nagging political civil war should be ended for a better future for next generations. I will make a nation where people enjoy freedom and prosperity under (the protection of) justice," he noted.

Choe also vowed to reform the country's public education and pension systems, improve the human rights of North Korean people and revisit the country's policy to phase out the use of nuclear power.

Choe, a member of the main opposition People Power Party, is currently the runner-up presidential hopeful on the opposition bloc, with support ratings of less than 10 percent in opinion polls. 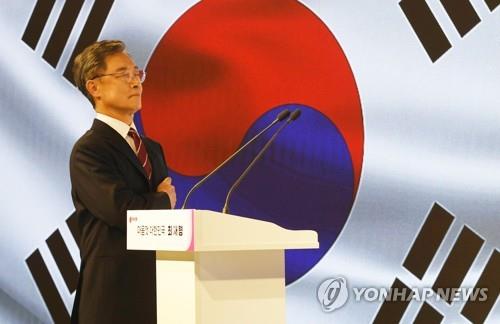 In reaction to Choe's presidential bid, the ruling Democratic Party (DP) renewed its criticism that he abused his official capacity as BAI chief to gain political interest.

"It marks a politically-driven change of career conducted in disregard of the duties and mandate required for public officials by the Constitution," DP spokesman Rep. Lee Yong-bin said in a press release.

"It constitutes an illegitimate start," Lee said, accusing Choe of accruing personal profits from his former status as a high-ranking public official.