Trading volume was moderate at about 621 million shares worth some 12.2 trillion won (US$10.7 billion), with gainers outnumbering losers 713 to 149. 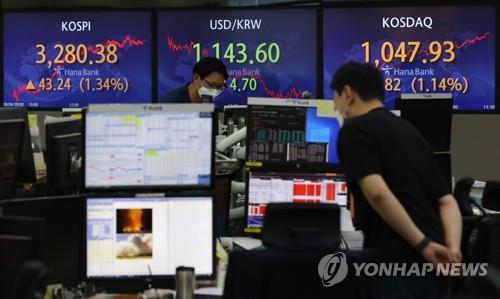 The KOSPI got off to a solid start, tracking overnight rallies on Wall Street over optimism for strong corporate earnings.

The S&P 500 gained 0.82 percent to close at a record high, with the Dow Jones Industrial Average and the tech-heavy Nasdaq composite advancing 0.8 percent and 0.55 percent, respectively.

The KOSPI gained ground as major chipmakers continued to advance for the third day. Other tech heavyweights also rose on expectations of robust earnings.

SK Innovation slumped 3.75 percent to 243,500 won after the firm decided to spin off its battery business.

The local currency closed at 1,143.6 won against the U.S. dollar, up 4.7 from the previous session's close.

Bond prices, which move inversely to yields, closed higher. The yield on three-year Treasurys lost 2.4 basis points to 1.418 percent, and the return on the benchmark five-year government bond fell 2.7 basis points to 1.636 percent.