SEOUL, Aug. 5 (Yonhap) -- The Korean Bar Association (KBA) began an investigation into its lawyer members over the use of a popular legal counseling application, as a new rule banning its members from offering legal aid on the online service went into effect Thursday.

"In accordance with the revision in the Code of Ethics for Attorneys and advertising regulations for lawyers, we started an investigation into lawyers who joined online legal service platforms and will decide on disciplinary measures in due process," the KBA said in a statement.

The controversy centers around LawTalk, an increasingly popular online service that has helped people find lawyers since its launch in 2014.

The association said the app disrupted the legal services market and served as a paid broker, an act prohibited under South Korea's Attorney-at-Law Act. Law & Company Co., the operator of the app, countered that its service was a legal advertising platform.

Complaints have been filed against 1,440 lawyers so far over alleged violations of the law, the KBA said, and the Seoul Bar Association has also received similar complaints against around 500 lawyers. There could be overlap in the two figures, according to the two associations.

"Legal counseling platforms only pursue profits and advertise lawyers who provide legal aid on their platforms without putting in place any device to verify them," the KBA said. 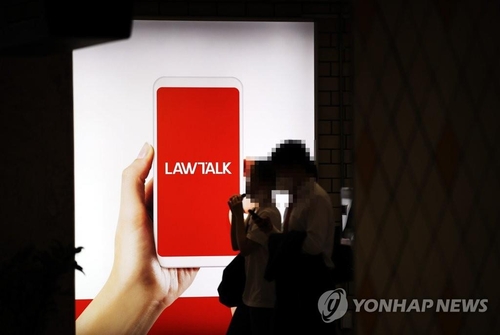 Amid a yearslong tit-for-tat battle, the association changed its rule in May to prohibit lawyers from joining online advertising platforms. The revision took effect Thursday. The KBA initially -- and mistakenly -- had said it was set to go into effect Wednesday.

"The KBA's measure, which greatly reduces the public's access to legal services, obstructs innovation in the legal market and blows the chance for the market to grow, will be remembered as the worst decision," Law & Company said in a statement. "We will protect our service and LawTalk's lawyer members against the KBA's out-of-date and unfair disciplinary action."

Justice Minister Park Beom-kye said Thursday that the ministry viewed the service as lawful and was reviewing whether there is a way to settle conflicts between the association and its members over the matter.