Trading volume was moderate at about 671 million shares worth some 11.7 trillion won (US$10.2 billion), with gainers outnumbering losers 518 to 308. 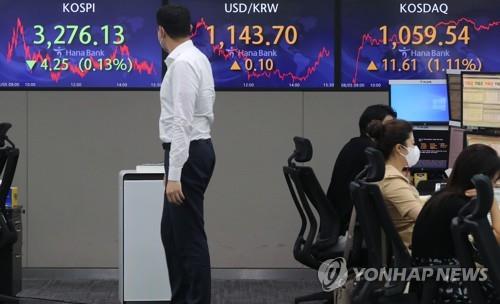 The KOSPI got off to a solid start on strong advances in bio heavyweights, as the country's daily new coronavirus cases spiked back to the 1,700s despite the toughest-ever virus restrictions.

The stock index turned choppy as bio and tech gains waned toward the session's close.

"Investors seem to have sold stocks to profit from the gains made in the past couple of days," Mirae Asset Securities analyst Park Gwang-nam said.

The local currency closed at 1,143.7 won against the U.S. dollar, down 0.1 won from the previous session's close.

Bond prices, which move inversely to yields, closed mixed. The yield on three-year Treasurys lost 0.4 basis point to 1.414 percent, while the return on the benchmark five-year government bond added 1 basis point to 1.646 percent.