According to a survey of 2,246 stock market-listed companies in the first quarter, only 1,668, or 5.2 percent, of the 32,005 executives were women, according to the Ministry of Gender Equality and Family.

Vice Minister Kim Kyong-seon told an online briefing that the rate is far lower than the OECD average of 25.6 percent cited by the British weekly The Economist. 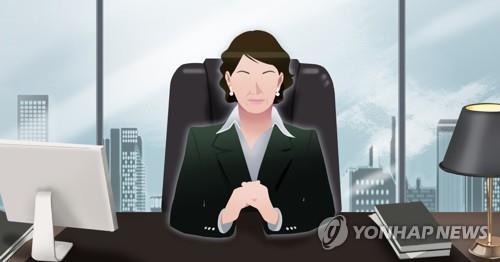 That was an increase of 25.3 percentage points from last year, when the revised capital market law took effect, banning such companies from appointing members of only one gender to their boards.

The report also showed that as a proportion of all female employees, female executives accounted for 0.41, while the equivalent for men was 6.3 times higher at 2.57 percent.

"There are not enough women in decision-making positions in the private sector, considering the expansion of the female workforce," Kim said. "Businesses should aim to increase gender diversity by actively trying to make improvements and change their perceptions."