The president said the hate crimes act also showed how the country can work as one to overcome bias and hatred.

"The vice president and I are honored to host leaders representing the rich diversity of Asian-American, native Hawaiian and Pacific Islander communities," Biden said at the start of a meeting with AAPI civil rights leaders at the White House, according to White House pool reports. 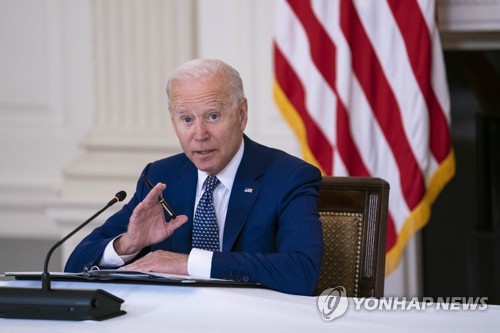 The meeting marked the second of its kind since Biden took office in January. The president held his first public meeting with AAPI community leaders in March when he visited Atlanta, less than a week after mass shootings at three days spas there left eight people, including six women of Asian descent, killed.

The president noted the AAPI leaders had expressed frustration at the Atlanta meeting.

"The discussion was very raw. It was powerful, and a common theme was that Asian Americans were feeling unsafe, unwanted, and some of you indicated feeling invisible sometimes," said Biden. "Our message back to you was, at that moment, 'We see you. We see you.'"

Hate crimes against the members of AAPI community have been on a sharp increase since the start of the COVID-19 pandemic in early 2020.

Biden and Vice President Kamala Harris have partly blamed the former Donald Trump administration for stoking bias and hatred toward Asian Americans by calling the new coronavirus a "kung flu" or "China virus."

The president said the COVID-19 Hate Crimes Act demonstrated how the country can still combat hatred when working together.

The meeting also comes amid the president's efforts to halt moves in many states to revise their election laws that many believe would limit the people's voting rights, especially those of ethnic groups.

"We have a full agenda to discuss: The pandemic, economy, immigration, voting rights and hate crimes," the president said at the start of his meeting with the AAPI leaders.

He met with the leaders of Latin American communities on Tuesday.