SEOUL, Aug. 6 (Yonhap) -- Samsung Electronics Co. is expected to dominate the foldable smartphone market this year with an 88 percent share, a report showed Friday, as the tech giant prepares to unveil its new foldable devices next week.

The global foldable market is estimated to triple from a year earlier to reach around 9 million units in 2021, and Samsung, the world's largest smartphone vendor, is projected to represent 88 percent of them, according to market tracker Counterpoint Research.

"Although the market for foldables is still niche, we expect 2021 shipments of Samsung foldable smartphones to grow significantly, driven by improved design and hardware, and competitive pricing," it said.

Counterpoint Research predicted the worldwide foldable smartphone market in 2023 to be 10 times bigger than in 2020 and even if more manufacturers enter the market, including Apple, Samsung is expected to maintain its top player status with a 75 percent market share. 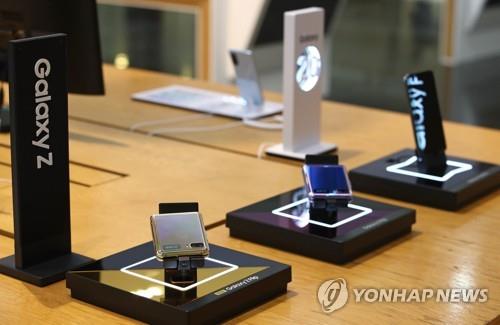 The South Korean firm is scheduled to introduce its new foldable smartphones -- Galaxy Z Fold3 and Galaxy Z Flip3 -- at its Unpacked event Wednesday, hoping they can solidify its leadership in the premium segment.

"With a significant price drop, improved design and appearance, Samsung is likely to target younger customers with the new foldable Flip smartphone," said Park Jin-suk, a senior analyst at Counterpoint Research. "The new Galaxy Z models will get S Pen support too, which can help absorb existing Note users."

With its plan to mainstream the foldable category, Park said Samsung may target the Chinese market, where the company has little presence.

"Despite having a negligible market share, Samsung can secure Huawei's vacant spot, and its success can contribute toward total shipment and sales volumes for its new foldables," Park added.

Regarding the U.S. market, Counterpoint Research pointed out Samsung's foldable smartphones should be released at cheaper prices to attract consumers.

"More affordable Samsung foldable smartphones may be attractive to some users, especially those who have previously purchased 'plus'- or 'ultra'-sized S-series or Note models, said Maurice Klaehne, a senior analyst at Counterpoint Research. "If the Flip model can be sold at a similar price point as the 'ultra,' we might see more adoption in the future."