Hyundai Heavy Industries Co., main affiliate of the shipbuilder, will build a semi-submersible floating production system (FPS) for a U.S.-based oil-developing company by Sept. 28, 2024, Korea Shipbuilding said in a statement.

The offshore oil production facility will be installed in Shenandoah field, 300 kilometers off the coast of Louisiana, in late 2024, it said.

"We will focus on winning more high-end offshore facility orders as countries such as Qatar, the U.S. and Latin America are expected to place offshore plant orders amid rising oil prices," the statement said.

With the U.S. order, Korea Shipbuilding, which also has Hyundai Mipo Dockyard Co. and Hyundai Samho Heavy Industries Co. under its wing, has achieved $17.4 billion worth of orders so far this year, exceeding its annual order target of $14.9 billion.

As of June, Korea Shipbuilding had $32.8 billion, or 350 ships, in order backlog, which will make the three shipyards busy for 2 1/2 years. 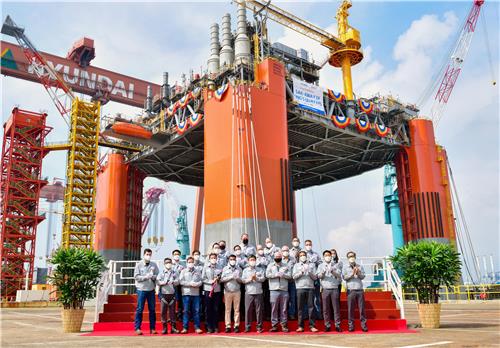