SEOUL, Aug. 6 (Yonhap) -- Six Army soldiers and one Navy officer tested positive for the new coronavirus, the defense ministry said Friday, the latest in a series of COVID-19 infections among the military population across the country.

Three enlistees at an Army boot camp in Paju, north of Seoul, were confirmed to have been infected while in quarantine following positive cases earlier, according to the ministry.

A soldier affiliated with a separate unit in Paju and an Army officer in the northwestern border town of Yeoncheon tested positive after their recent vacation, and the Navy officer in the southeastern city of Pohang contracted the virus following the infection of one of his family members, it added.

The latest cases raised the total number of infections reported among the military population to 1,520.

Nationwide, South Korea added 1,704 COVID-19 cases Friday as the fourth wave of the pandemic has shown no signs of a letup.

To bring the pandemic under control, the government decided Friday to maintain the current social distancing rules for another two weeks until Aug. 22, and the defense ministry followed suit.

The toughest scheme of Level 4, now in place for all the military population, calls for restricting service members' vacations and off-installation activities. They are also required to cancel or postpone all private meetings, prohibit nonessential events and travel, and conduct religious services online, according to the defense ministry.

Meanwhile, three of the virus-hit Cheonghae unit members are still under hospital treatment, and one of them was set to be released later in the day following a full recovery, according to the ministry. A total of 272 out of 301 unit members contracted the virus last month while conducting missions in Africa and returned home.

The ministry also added 114,500 troops aged 30 and over, or 97.9 percent of the age group who had their first vaccine shots, had received their second doses as of Thursday. 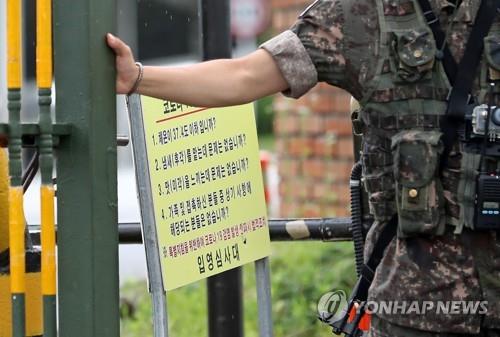