SEOUL, Aug. 8 (Yonhap) -- South Korea has tentatively decided to conduct the upcoming military exercise with the United States as planned, albeit in a scaled-back manner due to the pandemic, sources said Sunday, despite North Korea's warning the maneuvers will cast a pall over inter-Korean relations.

Whether and how to conduct the summertime exercise has drawn keen attention, particularly after Kim Yo-jong, the sister of North Korean leader Kim Jong-un, warned the drills will dampen the conciliatory mood created after Pyongyang restored long-severed hotlines with the South.

"We are working to stage the exercise as planned, which is a regular one and necessary for a combined readiness posture. We've maintained close consultations with the U.S. over the issue," a government source said.

The computer-simulated Combined Command Post Training (CCPT) is expected to be held from Aug. 16-26, which is likely to come after a four-day crisis management staff training, set to kick off on Aug. 10, another source said.

"The upcoming exercise would involve a minimum level of troops, which will be even smaller than the springtime one, and no outdoor drills will take place," the source said, noting that the defense ministry decided Friday to extend the toughest antivirus scheme for the entire military population until Aug. 22 amid the COVID-19 pandemic.

South Korea has seen a drastic surge in confirmed cases across the nation since late last month, with the daily caseload remaining in the 1,700s for the third consecutive day Friday.

The two sides staged the springtime exercise in March in a scaled-back manner given the virus situation and peace efforts involving North Korea. At that time, the defense ministry enforced the second lowest social distancing scheme for the military, with the daily caseload across the nation coming to around 400.

The defense ministry has said that outdoor maneuvers have been carried out throughout the year, rather than done intensively at a specific period of time.

Ministry spokesperson Boo Seung-chan said that it is still discussing details about the matter with the U.S., while closely following related circumstances. 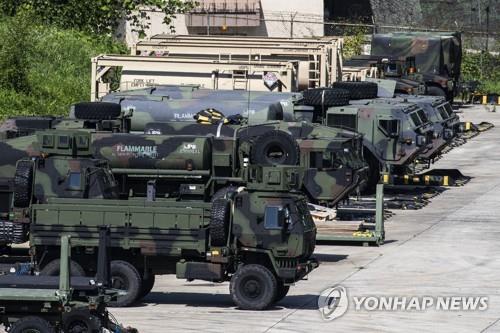