North Korea's Ambassador to Indonesia An Kwang-il attended the forum instead of North Korean Foreign Minister Ri Son-gwon, as was the case last year.

"Minister Chung explained that based on leader-level agreements among South and North Korea, and the United States, our government has continued to make efforts to resume dialogue," the foreign ministry said in a press release. 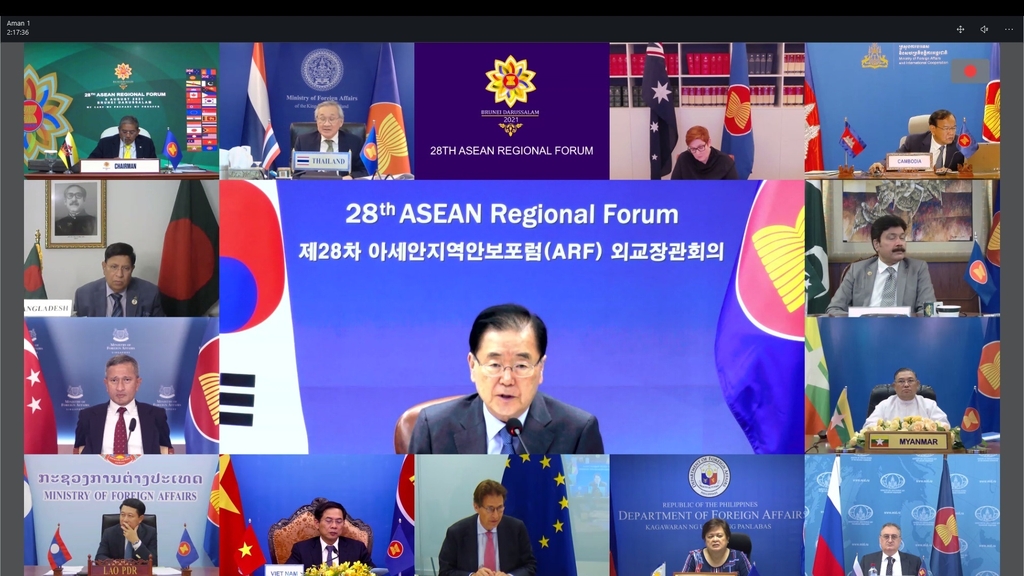 Chung portrayed the reactivation of the cross-border communication lines as "positive progress" in the efforts to kick-start Seoul's push to foster a lasting peace on the Korean Peninsula, and expressed expectations that the two Koreas can cooperate in various areas from mid- and long-term perspectives, according to the ministry.

Last week's reactivation of the communication lines fueled hopes for the resumption of nuclear diplomacy with the North. But optimism was tempered by Pyongyang's warning that the planned South Korea-U.S. military exercise would cast clouds over cross-border ties.

Chung also urged Pyongyang to work together toward the denuclearization goal, referring to the 2018 Pyongyang summit declaration, in which President Moon Jae-in and North Korean leader Kim Jong-un shared the view that the peninsula must be turned into a "land of peace free from nuclear weapons and nuclear threats."

At the same forum, U.S. Secretary of State Antony Blinken was said to have reiterated that Washington remains willing to meet anytime, anywhere without preconditions, as long as Pyongyang designates its new official with a negotiation mandate.

In a press release, State Department spokesman Ned Price said Blinken, along with other participants, called for the complete denuclearization of the peninsula.

The North Korean participant, An, was said to have mentioned neither South Korea nor the U.S. but stressed Pyongyang's will for peace on the peninsula remains unchanged.

Other than the Korea-related issues, the regional forum touched on various other regional and global issues, such as climate change, cybersecurity, freedom of navigation in the South China Sea and the political turmoil in Myanmar.
(END)