According to the ministry, pigs at a farm in Gangwon Province were infected with the deadly animal disease, prompting the authorities to cull animals there, according to the Ministry of Agriculture, Food and Rural Affairs. 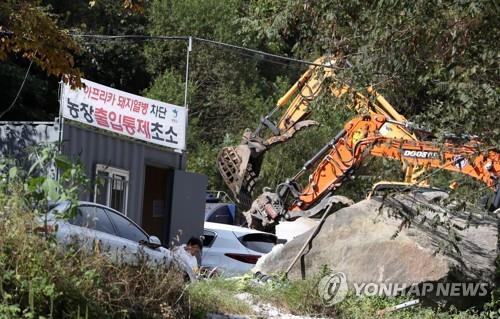 Prime Minister Kim Boo-kyum called on health authorities to make utmost efforts to swiftly contain the spread of the disease.

In 2019, ASF swept through pig farms in northern regions covering Gyeonggi and Gangwon provinces, prompting authorities to cull about 400,000 pigs nationwide as part of preventive measures. A total of 14 farms were infected.

Although no new ASF cases had been reported from local farms for the past three months, the virus prevailed among wild boars, which can potentially infect domestic pigs through contact.

ASF does not affect humans but is deadly to pigs. There is currently no vaccine or cure for the disease.
(END)