Around midnight, Lupit is predicted to land on Japan's Kyushu before presumably passing further northward between the South Korean side of the East Sea and the northern coast of Japan the next morning, the Korea Meteorological Administration said.

As of 11 a.m., Lupit's central pressure stood at 992 hectopascals, and it is estimated to pick up further force when it hits the inland areas of Kyushu.

South Korea may not come under the direct influence of Lupit, which originated in the sea south of China's city of Shantou, but strong winds and heavy rainfall are likely to hit the country as the storm moves near the country Monday, the weather agency noted.

The maximum instantaneous wind speed could go up to 20 meters per second Sunday night and a strong wind warning in some parts of Gangwon Province is highly likely later in the day.

Till Sunday night, east-coastal regions of Gangwon Province may receive heavy rains of up to 200 millimeters, the agency added.

Downpours of up to 250 mm have also been forecast in regions near the country's Ulleung Island and Dokdo in the East Sea for early Monday morning. 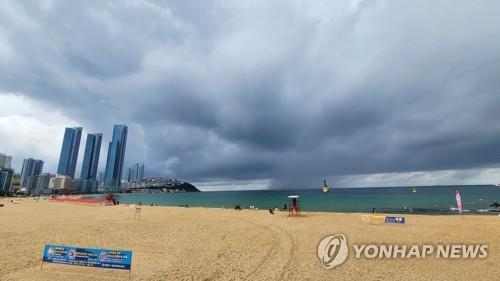