SEJONG, Aug. 9 (Yonhap) -- Payments made with cards in South Korea expanded 7 percent in July from a year earlier despite a resurgence of coronavirus infections, a report showed Monday.

Spending made with credit, debit and prepaid cards issued by major card firm Shinhan Card Co. stood at 14.1 trillion won (US$12.3 billion) in July, up from 13.1 trillion won a year earlier, according to the report from the office of Rep. Park Kwang-on of the ruling Democratic Party.

It was up 11.4 percent from the same month in 2019, six months before the outbreak of COVID-19 in the country.

The amount doesn't include figures from seven other credit card issuers but offers a glimpse into a spending pattern by local credit cardholders.

Park's office said the recent resurgence of coronavirus cases seems to have had a limited impact on South Koreans' credit card spending.

The hospitality industry was hit hardest by the coronavirus resurgence in July with card spending for the sector plunging 17.8 percent from a year earlier.

In contrast, card spending for the wholesale and retail industries surged 11.3 percent and 19.1 percent on-year in July, respectively, according to the report.

South Korea has put its toughest-ever virus curbs in place as it is grappling with the fourth wave of the pandemic, with its daily new cases topping 1,000 for more than a month. 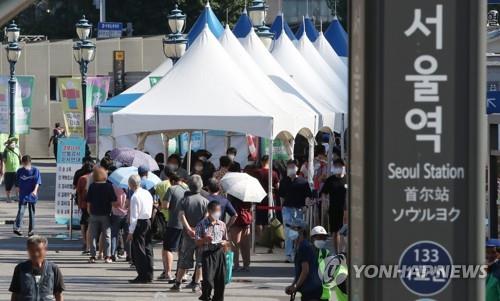