(ATTN: UPDATES with arrival in Gwangju and departure from courtroom in paras 1-3, 5-6, 11-12; CHANGES headline, dateline, photo)

SEOUL/GWANGJU, Aug. 9 (Yonhap) -- Former President Chun Doo-hwan attended an appellate court hearing on a defamation case in the southwestern city of Gwangju on Monday after having failed to show up twice.

But the hearing, which began at the Gwangju District Court's appellate division at 2 p.m., ended after only 25 minutes, as the 90-year-old former president complained of breathing difficulties. 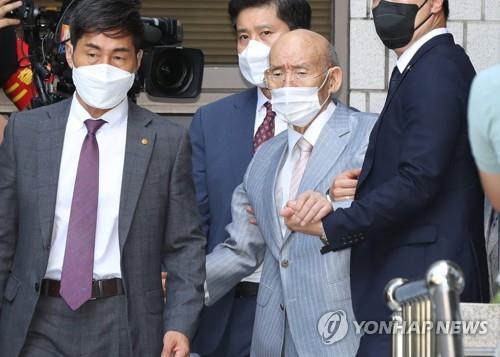 Chun, supported by his bodyguards, was asked similar questions in Gwangju before entering the court but declined to answer.

While inside, Chun answered his identity verification question with the help of his wife and was seen dozing off. 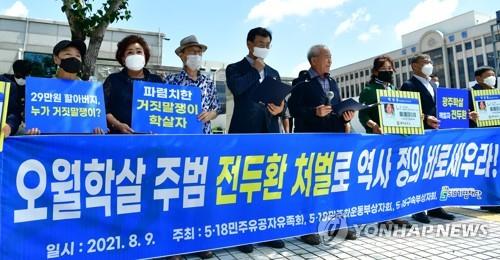 During his district court trial, the former president had shown up in the courtroom three times -- March 11, 2019 and April 27 and Nov. 30, both of last year.

As Chun arrived in Gwangju, a group of civic activists held a news conference in front of the court's entrance to denounce his attitude as "unfaithful" and ask the court to give him a "stern and swift" verdict.