Trading volume was moderate at about 685 million shares worth some 15.5 trillion won (US$13.5 billion), with losers outnumbering gainers 647 to 208. 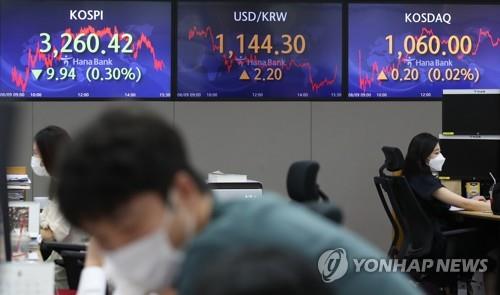 The KOSPI got off to a weak start as U.S. jobs data in July logged a steeper hike than the market consensus, fueling investor worries that the U.S. Fed may pivot from its dovish stance and consider accelerating its timeline for a rollback of its accommodative policies.

The KOSPI retreated toward the session's close as Kakao Bank trimmed its gains.

"Kakao Bank surged on the KOSPI, but other (large) stocks' losses eventually offset its gains," he added.

Internet portal operator Naver advanced 0.67 percent to 447,500 won, with its rival Kakao gaining 1.72 percent to 148,000 won on the strong performance of its financial unit.

The local currency closed at 1,144.3 won against the U.S. dollar, down 2.2 won from the previous session's close.

(LEAD) Seoul stocks down for 3rd day after choppy trading

(LEAD) Seoul stocks down for 3rd day after choppy trading