(ATTN: UPDATES with response to ministry's decision in last 4 paras)

Justice Minister Park Beom-kye announced that Lee will be among 810 inmates to be released at 10 a.m. Friday in celebration of the Aug. 15 Liberation Day.

The ministry considered "the country's economic situation and the conditions of the global economy amid the prolonged COVID-19 pandemic" as factors behind the decision, Park said in a briefing.

He also added that the ministry considered other factors including "social sentiment, and (the prisoner's) behavior and attitude."

Still, Lee will not be able to immediately return to Samsung because the Act on the Aggravated Punishment of Specific Economic Crimes bans those convicted of embezzlement or breach of trust involving amounts over 500 million won (US$436,300) from working for companies related to their crimes, or any institution that receives government subsidies. The ban lasts five years from the day an offender completes his or her jail term.

The minister said no decision has been made on the restriction. 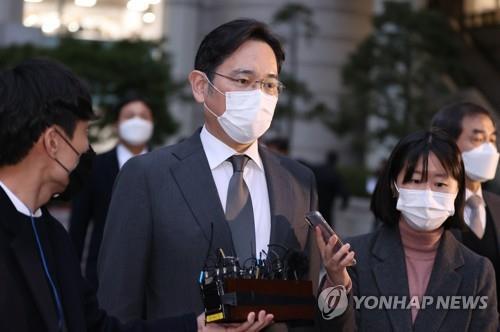 "The decision reflects the people's demand for economic recovery and call for Samsung to play a role in leading the recovery," the Federation of Korean Industries in a statement, asking the group to more actively "make investments and create jobs."

The KCCI also welcomed the decision that, it said, will allow Lee to come back to work at a time when "fast decisions" have become ever more crucial in running a business.

But civic groups, including the progressive People's Solidarity for Participatory Democracy (PSPD), condemned the parole and called it "preferential treatment toward a chaebol leader, and being tantamount to the death penalty to judicial justice."

The PSPD also called the decision "shameful" and said that it set a bad precedent for other chaebol leaders.

(2nd LD) Samsung heir to be released on parole on Friday

(2nd LD) Samsung heir to be released on parole on Friday