WASHINGTON, Aug. 9 (Yonhap) -- Nothing has changed for the need to maintain the joint defense readiness of South Korea and the United States, a Pentagon spokesman said Monday, emphasizing the importance of the allies' joint military exercises.

John Kirby also reiterated any decision on the countries' joint military drills will be made jointly by the allies.

"Nothing's changed about our need for readiness on the Korean Peninsula and our desire to work in lockstep with our ROK allies on a training regimen that improves that readiness and keeps that readiness strong," the spokesman said in a press briefing. 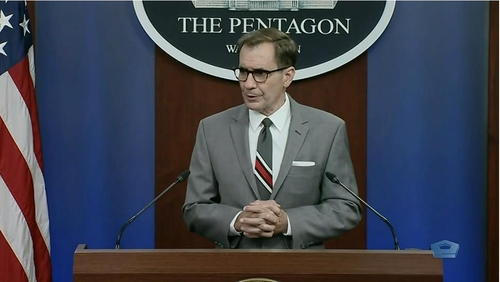 His remark comes after Chinese Foreign Minister Wang Yi said an upcoming joint exercise between South Korea and the U.S. may not be "constructive" and that Washington should try to avoid taking any action that could lead to tension with North Korea.

Wang made the remark at the ASEAN Regional Forum, held virtually last week.

Pyongyang regularly describes South Korea's joint military drills with the U.S. as war rehearsals. The North has also linked its recently reactivated communication channels with South Korea to what Seoul will do with an annual joint drill set to be held this month.

The South Korean Foreign Ministry has dismissed the Chinese minister's remarks as "unusual," saying the joint exercises are defensive in nature.

"The South Korea-U.S. combined exercise is an annual exercise of a defensive nature, and it is an issue that South Korea and the United States decide at the alliance level," it said in a statement released earlier.

Still, a large number of South Korean lawmakers are calling for a postponement of the joint exercise to help resume inter-Korean dialogue.

As of Thursday, a total of 74 lawmakers have signed a petition for a delay of the military drill on the condition that the two Koreas resume dialogue.

The Pentagon spokesman refused to comment on domestic politics when asked about U.S. reaction to the call from South Korean legislators.

Instead, he reiterated that any decisions regarding joint military drills will be made through consultation between the two allies.

"We make these decisions, as I've said many, many times before, in lockstep with our ROK allies and that's not going to change," said the spokesman.

Adm. John Aquilino, commander of U.S. Indo-Pacific Command, earlier highlighted the need for the allies to maintain a strong defense posture to support diplomacy with the recalcitrant North.

"From the military aspects, the alliance, as well as the strength that we have in the region, enables the U.S. government to do diplomacy from a position of strength," he said last week in a virtual forum hosted by the Washington-based Aspen Institute think tank.

(LEAD) 'Nothing has changed' about need for joint exercise on Korean Peninsula: Pentagon

(LEAD) 'Nothing has changed' about need for joint exercise on Korean Peninsula: Pentagon