SEOUL, Aug. 10 (Yonhap) -- Sales of department stores in South Korea grew at the fastest-ever clip in the second quarter of the year amid the coronavirus pandemic, data showed Tuesday.

Local department stores saw their sales in terms of constant prices soar 20.3 percent on-year in the April-June period, according to the data from the Korean Statistical Information Service (KOSIS).

It was the largest-ever on-year increase for the second quarter since data tracking began in 1995.

Industry watchers attributed the second-quarter jump to the so-called base effect, as consumer spending plunged during the same period a year earlier due to the outbreak of COVID-19.

In contrast, sales at supermarkets and grocery stores sank 10.4 percent in the second quarter from a year earlier, or the steepest on-year drop for the period.

On a current price basis, department store sales surged 21.5 percent on-year to 8.3 trillion won (US$7.24 billion) in the three-month period, while sales of supermarkets and grocery stores fell 5.2 percent to 11.2 trillion won. 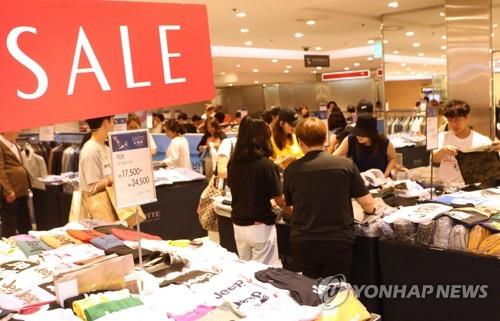