SEOUL, Aug. 10 (Yonhap) -- South Korea saw an increased number of people busted in drug-related crimes in the first half of this year, driven in part by a surge in international drug trafficking, a government report showed Tuesday.

According to the Office for Government Policy Coordination (OPC), a total of 7,565 drug offenders were nabbed between January and June, up 8.6 percent from 6,969 tallied over the same period last year. Of them, 1,138 were arrested.

In particular, the number of drug offenders aged 19 and below jumped by 156.5 percent to 277 on-year. 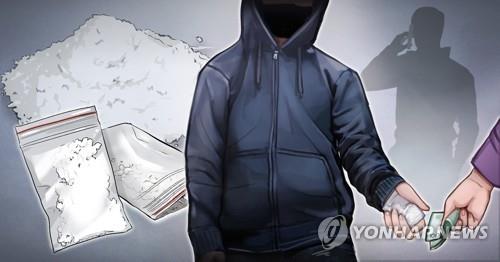 The report also showed that drug trafficking via international shipment shot up by 283 percent to 605 cases as drug dealings on global online platforms, such as the dark web and social network services, became more prevalent amid the COVID-19 pandemic.

The OPC said that the government has beefed up police forces to crack down on online drug trafficking cases and those involving cryptocurrency in response to the new trend.

Authorities seized 143.2 kilograms of psychotropic drugs, such as heroin and methamphetamine, and 49 kg of marijuana over the first six months of this year.

The figures were up 177 percent and 227 percent from the first half of last year, respectively.

"We will strengthen cooperation with domestic and foreign investigative authorities to eradicate illegal drug trafficking," a senior OPC official said.

Number of drug offenders rises nearly 9 pct in 1st half

Number of drug offenders rises nearly 9 pct in 1st half