SEOUL, Aug. 10 (Yonhap) -- Five American service members and a family member stationed at a U.S. military base near Seoul have tested positive for the new coronavirus, while 24 other people affiliated with U.S. Forces Korea (USFK) were found to have been infected upon their arrival here, the U.S. military said Tuesday.

Four service members and a family member at Osan Air Base in Pyeongtaek, 70 kilometers south of Seoul, were found to have contracted COVID-19 after developing symptoms while the other service member was found to have been infected after providing a testing sample required to return to the United States, according to USFK.

Separately, 22 service members and two family members were confirmed to have contracted the virus after arriving in South Korea between July 13 and Aug. 8.

"All individuals have since been transferred to an isolation facility designated for confirmed COVID19 cases at U.S. Army Garrison Humphreys or Osan Air Base," the U.S. military said in a release.

The latest cases raised the total number of infections reported among the USFK-affiliated population to 1,193. 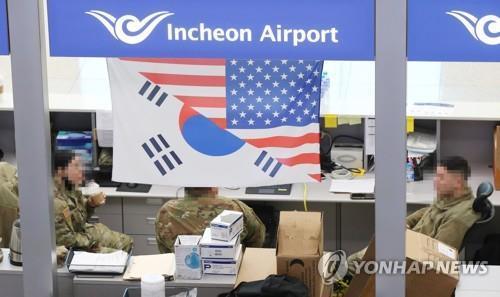