SEOUL, Aug. 10 (Yonhap) -- Global top shipbuilder Hyundai Heavy Industries Co. said Tuesday that it has applied for an initial public offering (IPO), seeking to raise up to 1.08 trillion won (US$900 million) for the development of its eco-friendly ship technologies next month.

The shipbuilder has submitted the application to the top financial regulator Financial Services Commission (FSC) to sell its new shares on the local main stock market in September, it said in an emailed statement.

Hyundai Heavy Industries, a subsidiary of Korea Shipbuilding & Offshore Engineering Co. (KSOE), will offer 18 million new shares at between 52,000 won and 60,000 won each. 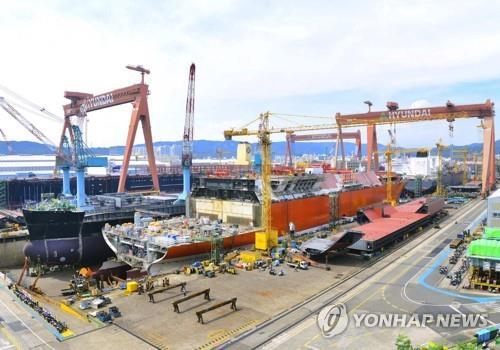 The proceeds from the IPO will be used to develop eco-friendly ships and autonomous ships and build smart shipyards as well as offshore hydrogen production plants, the company said.

In a separate regulatory filing, the shipbuilder said it will use 47 billion won of the total proceeds to repay its debts.

In March 2019, Hyundai Heavy Industries Group signed a deal with the state-run Korea Development Bank (KDB), the main creditor of its rival Daewoo Shipbuilding & Marine Engineering Co., to buy a 55.72 percent stake in the shipbuilder that had been mired in a severe cash shortage since 1999.

Hyundai Heavy applies for IPO to raise up to 1.08 tln won

Hyundai Heavy applies for IPO to raise up to 1.08 tln won