Net income stood at 795.7 billion won (US$689.2 million) in the April-June period on a consolidated basis, compared with 432.3 billion won a year earlier, according to a regulatory filing. 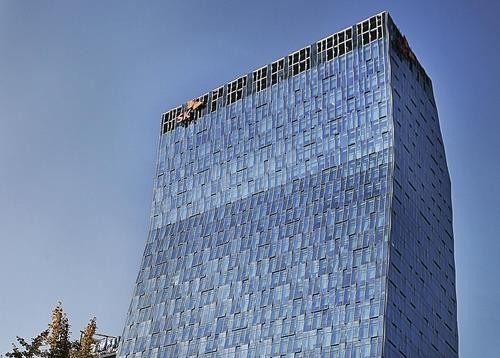 SK Telecom said equity gains totaled 657.6 billion won in the April-June period on the back of SK hynix's strong performance.

The country's No. 2 chipmaker last month reported that its net income for the second quarter reached 1.98 trillion won, up 56.5 percent from a year earlier. SK Telecom holds a 20 percent stake in the company.

The wireless carrier also cited growth in its mobile service for the upbeat second-quarter earnings.

As of end-June, SK Telecom had 7.7 million 5G subscribers, compared with 6.74 million at the end of March.

SK Telecom's new tech businesses, ranging from media to online commerce, also logged robust growth, with its sales reaching 1.58 trillion won, up 10.1 percent from the previous year as the mobile carrier prepares to split into two in November by creating a new investment-focused company.

The new company, tentatively named SKT Investment Co., will serve as the holding company of 16 units, including SK hynix, e-commerce subsidiary 11Street and app market operator ONE Store, and has plans to invest in semiconductor and other promising tech industries.

In a conference call, SK Telecom said it plans for the new company's semiconductor division to be valued at 40 trillion won by that year, followed by other existing businesses at a combined 25 trillion won and new investments at 10 trillion won.

The surviving SK Telecom will focus on its traditional mobile network business as well as a new subscription service.

The mobile carrier said it will unveil the new service later this month, which aims to have 35 million subscribers by 2025.

As for the planned initial public offering for 11Street, the company did not provide a specific time frame but said it is planning for more investment and promotions, including the e-commerce company's collaboration with U.S. retail giant Amazon.com Inc. to be unveiled later this month.

SK Telecom has said that it is preparing to launch a service so that Amazon products can be directly purchased from 11Street.