SEOUL, Aug. 11 (Yonhap) -- The main opposition People Power Party (PPP) saw its membership expand by nearly 30 percent over the past two months in the run-up to next year's presidential election.

"During the two months alone since the inauguration of party chief Lee Jun-seok (in the party convention on June 11), over 110,000 supporters newly joined PPP as members," a key party official told Yonhap News Agency on Wednesday.

The entry of ex-Prosecutor General Yoon Seok-youl into the party last month also drove up the expansion, the official said.

According to party sources, 90,000 of the new members joined the party as a "duty member," who has the right to take part in the party's decision-making processes, pushing up the total number of the PPP's duty members by over 30 percent to 370,000.

The sharp increase is widely seen as reflecting the keen public attention the PPP has garnered with its landslide victories in the April Seoul and Busan mayoral by-elections, and the sensational election of Lee, the youngest-ever leader of a mainstream political party in South Korea's modern political history.

Many see the demographic change in the party's membership heavily influencing the PPP's ongoing primary race to pick its single candidate to run in the March 9 presidential election. Votes by party members will count for 30 percent of the result of the PPP's second round of the primary election and 50 percent of the final third round.

Winning support from party members is, therefore, expected to be one of the major determinants of the success or failure of leading opposition presidential hopeful Yoon's bid.

"Whether Yoon will be (strong) enough to be able to claim the presidency will determine support from the PPP's party members," a PPP official said on condition of anonymity. 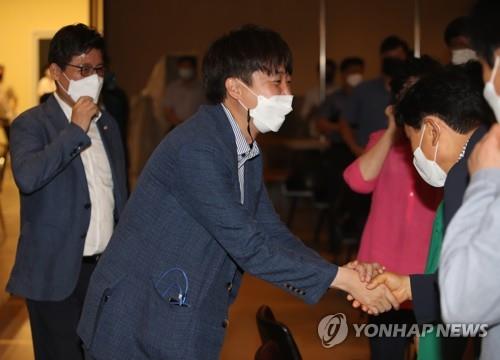