SEOUL, Aug. 11 (Yonhap) -- South Korea is suffering from the worst wave of the coronavirus pandemic despite tough restrictions across the country as more contagious variants are fast spreading amid the lagging vaccination drive, putting the country's virus battle in jeopardy.

New cases have rapidly risen across the nation since early July, surging to a fresh high of 2,223 on Wednesday, according to the Korea Disease Control and Prevention Agency (KDCA).

It was the first time that the new cases surpassed the 2,000 threshold since the nation reported the first outbreak on Jan. 20 last year.

The daily caseload had mostly moved between 300 and 600 in the first half of the year, but it surpassed 1,000 for the first time on July 7 and stayed in the quadruple digits for over a month despite weeks of toughened social distancing restrictions. 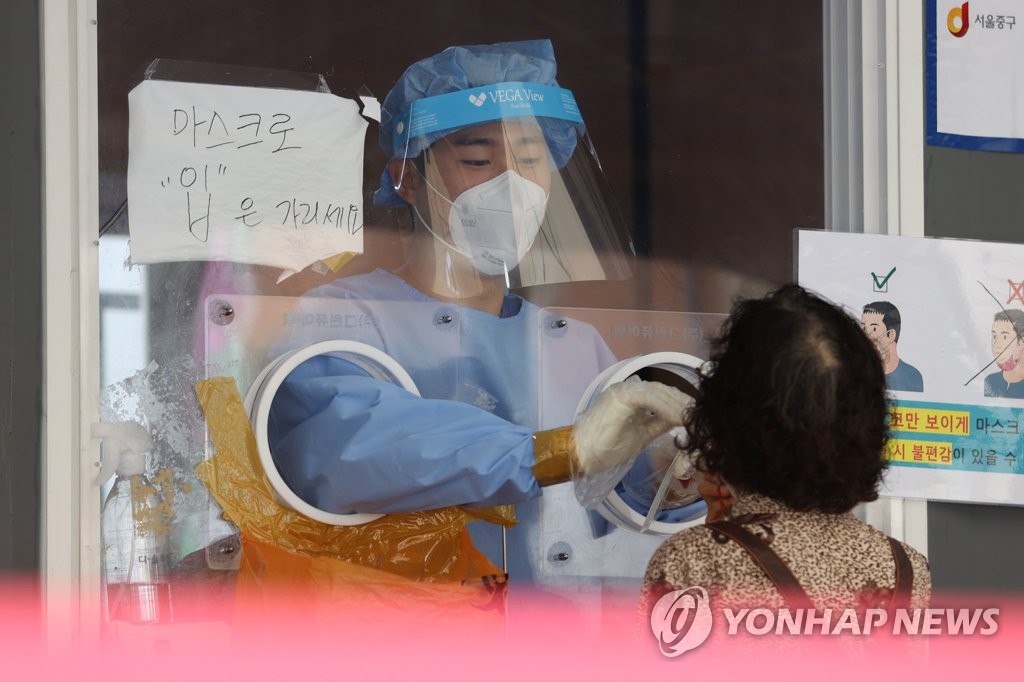 The wider Seoul area, where half of the nation's 52 million population lives, has been under Level 4 restrictions, the highest in the four-tier virus curbs, for the past five weeks, while most other areas have implemented Level 3 distancing for the last three weeks.

The "semi-lockdown" Level 4 restrictions ban gatherings of more than two people after 6 p.m., and place a 10 p.m. curfew on restaurants and cafes.

The scope of the fourth wave of the pandemic far surpasses the previous waves -- one each in the spring, summer and winter seasons of 2020 -- and it poses a greater challenge to antivirus efforts due to the widespread community transmissions driven by the more transmissible delta variant.

Among 2,641 variant cases reported over the past week, 97 percent of them were identified as the highly transmissible delta variant first reported in India, the KDCA said.

Health authorities expressed worries over the fast rise of the delta virus across the nation and the rising number of "silent spreaders," whose transmission routes are unknown, urging people to stay at home during the summer travel season, especially ahead of the new school semester later this month.

"The COVID-19 response has entered a new phase and a new crisis," Health Minister Kwon Deok-cheol said during an interagency virus response meeting. "We have to redouble efforts to curb the virus surge and raise vaccination rates to bring the situation under control and get back to normal." 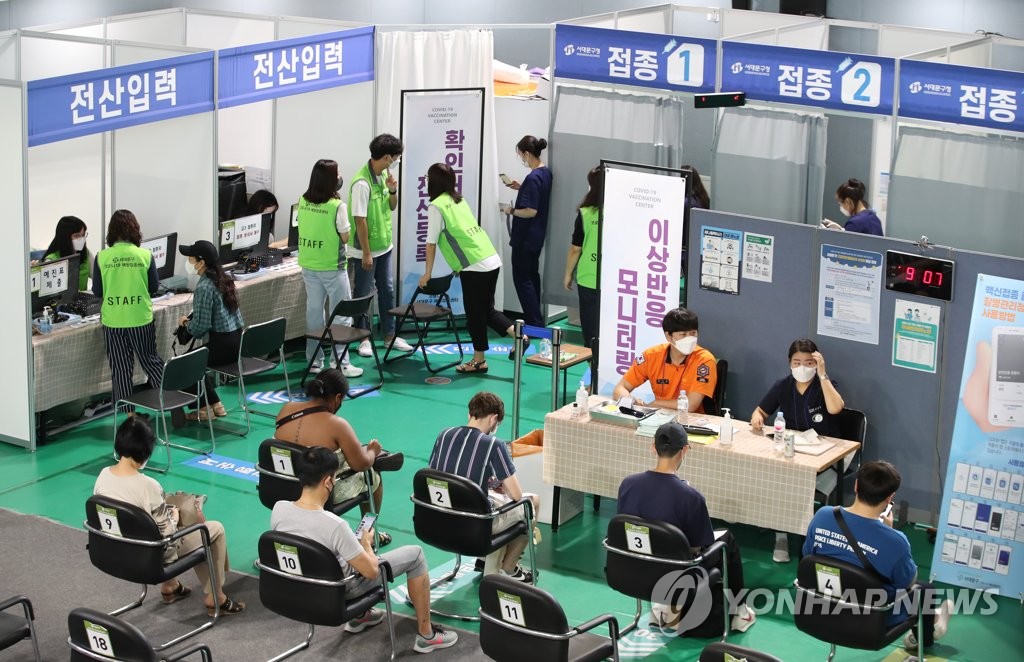 Over the past week, over 30 percent of new cases were untraceable, and the reproduction rate, which refers to the number of people a single patient can infect, stood at 0.99, the KDCA said.

Authorities expected the virus surge to continue in the coming weeks, with a virus dynamics model predicting the daily new cases could rise to around 2,500 and 3,000 in late August if the reproduction rate is 1.06.

Experts agreed that the worst is yet to come as the fourth wave continues to gain traction and new ground.

"The worst of the pandemic has not yet come," Chon Eun-mi, a pulmonologist at Ewha Womans University Mokdong Hospital, said. "Virus cases may reach their peak next week or in two weeks."

Despite the worsening situation, the country's vaccination campaign has been slower than expected due to glitches in securing vaccines on time.

A total of 21.6 million people, or 42.1 percent of the country's 51.3 million population, have received their first shots of COVID-19 vaccines, while 15.7 million people, have been fully vaccinated, according to government data.

That's nowhere near its goal of vaccinating at least 70 percent of the population by September, which is aimed at creating herd immunity in November.

To make matters worse, U.S. drugmaker Moderna has recently notified the government that it plans to supply less than half of the 8.5 million doses of its COVID-19 vaccine planned for August, spawning concerns over a delayed vaccine rollout. 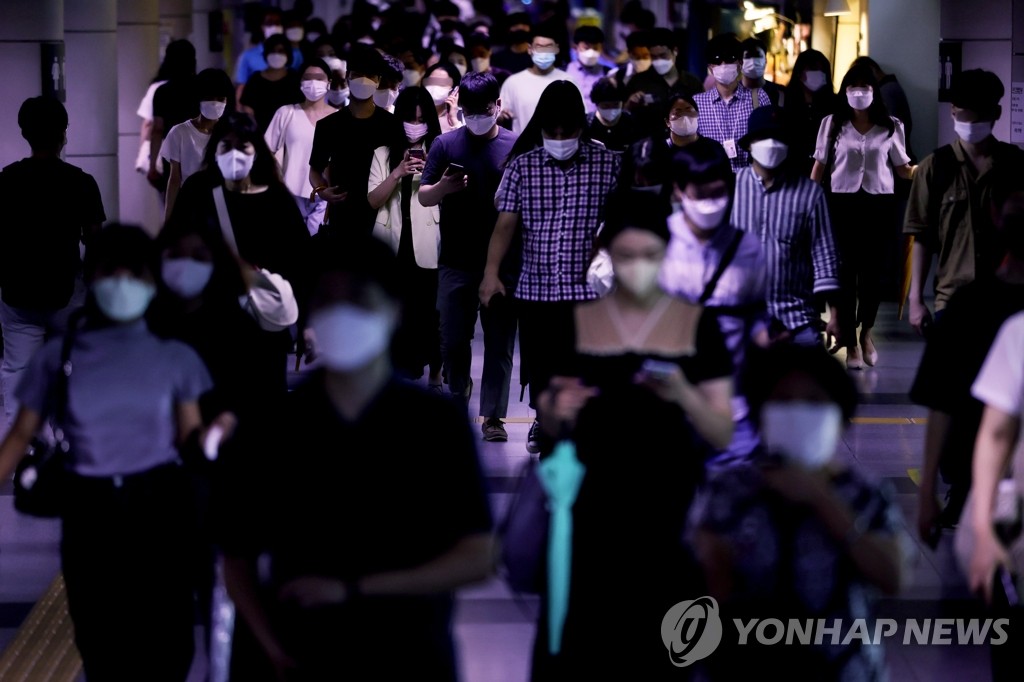 While the vaccination campaign has focused on the elderly population and priority groups, such as medical staff and the essential workforce, authorities are gearing up to inoculate the general public and began advance reservations for vaccine shots for people aged 18 to 49 on Monday.

Experts stress the importance of individuals receiving the full dose of vaccines to flatten the virus curve and protect vulnerable groups from suffering severe conditions.

"Virus transmission is not expected to slow down for a while due to the fast-rising delta cases and pandemic fatigue, while the vaccination rate lags," Jung Jae-hoon, a professor of infectious medicine at Gachon University Gil Hospital, said.

"The government should put priority on speeding up the inoculation drive to raise the ratio of fully vaccinated people."

Authorities said they will increase efforts to raise the vaccination campaign among the general public while tightening antivirus measures and expanding testing to detect infections at an early stage.

"Despite the global vaccine supply shortage, the government will utilize the current vaccine doses as much as possible to smoothly carry out the vaccination program," Kwon said. "We will consider giving booster shots (to fully vaccinated people), considering recent breakthrough cases in nursing homes."