WASHINGTON, Aug. 11 (Yonhap) -- U.S. President Joe Biden will host a summit of leaders from U.S. allies and other democratic countries this year to promote their shared values, the White House said Wednesday.

The leaders will discuss three key issues: how to defend against authoritarianism, fight corruption and advance human rights, according to the White House.

"The president has said that the challenge of our time is to demonstrate that democracies can deliver by improving the lives of their own people and by addressing the greatest problems facing the wider world," it said in a statement.

"In keeping this commitment, today President Biden is pleased to announce that in December he will bring together leaders from a diverse group of the world's democracies at a virtual Summit for Democracy," it added.

The virtual summit will be held Dec. 9-10 and will be followed by a second summit about a year later and in-person if conditions permit. 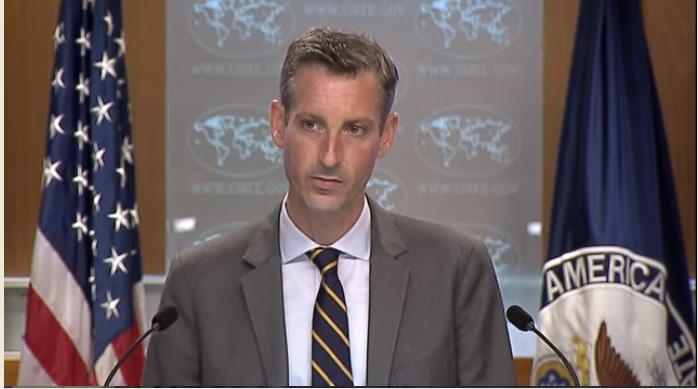 The proposed summit comes amid an intensifying rivalry between Washington and Beijing.

The White House did not provide a list of countries that will attend, but the State Department later said the summit will be as inclusive as possible.

"What I can say is that we have reached out to a regionally diverse set of both well established, as well as emerging democracies, whose progress and commitments will advance a more just and peaceful world," department spokesman Ned Price said in a daily press briefing.

He also said the U.S. will seek concrete initiatives that can promote democracy.

"It is an opportunity to engage, listen and speak honestly about the challenges that democracies face. It's an opportunity to work together with like-minded governments, civil society and the private sector on meaningful new commitments and new initiatives, and to cooperatively build the foundation for democratic renewal globally," said Price.

"This is not just a forum for sharing thoughts. This is a forum for putting forward concrete ideas, concrete commitments," he added.

The State Department reiterated the summit will lead to actions that will promote democratic values globally.

"The December 2021 Summit will kick off a year of action by participants to make democracies more responsive and resilient, and to build a broader community of partners committed to global democratic renewal," it said in a press release posted on its website.

"By delivering on the commitments made at the summit, we aim to show how democracies can deliver on the issues that matter most to people: strengthening accountable governance, expanding economic opportunities, protecting human rights and fundamental freedoms, and enabling lives of dignity," it added.