SEOUL, Aug. 12 (Yonhap) -- Many South Korean married couples cannot relate to the "lived happily ever after" narrative any more. It is not an assumption but is proved by data: Half of the country's married couples fall out of love and end up divorcing, data shows.

And the entertainment industry is quick -- and clever -- to catch the trend. It has started to air voices of the divorced and a candid portrayal of life after divorce and single parenthood, in an indication that divorce is no longer a taboo as it once was.

In November, the cable channel TV Chosun broadcast a reality program, "We Got Divorced," featuring divorced star couples, who separated relatively amicably, reuniting and spending some time with each other. "You would never know the inside story of a divorced couple from afar," read a catchphrase of the show.

Borrowing the title from MBC TV's popular variety show "We Got Married," a celebrity dating program that aired from 2008 to 2017, the reality show set out to explore post-divorce relationships, laid bare the pain still raw from one of the most stressful life events and sounded out the possibility of mending ties again. 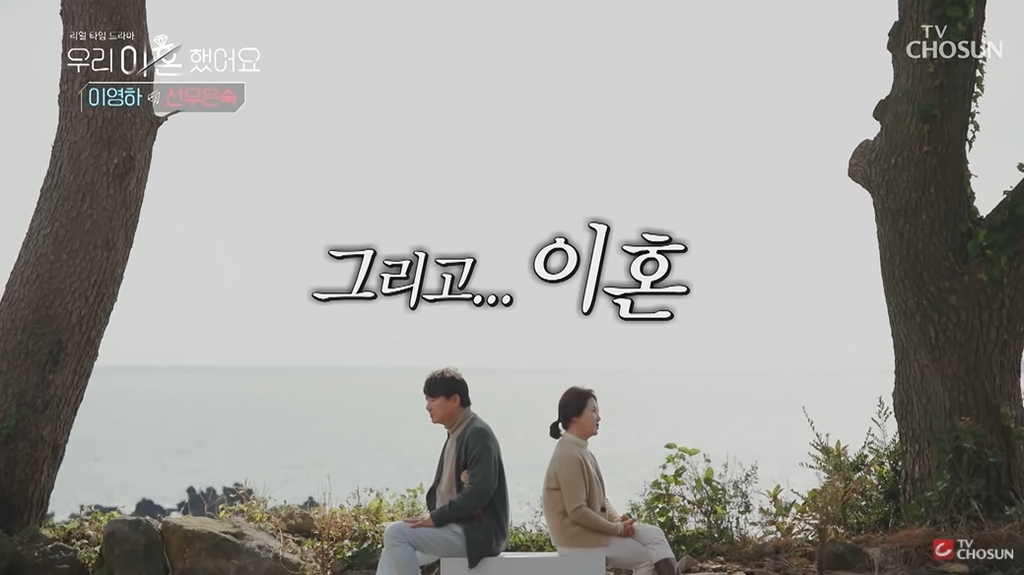 Despite a tingle of excitement and nostalgia for the life they once tried to build together, the couples soon were hit with the reality all over again that many irreconcilable differences -- from communication problems and different values to discord with in-laws and absence of intimacy -- that made them unable to remain married were still there.

Life after divorce can be just as hard -- at least in the beginning.

"What is so hard about divorce? It is that I have to pretend that I am fine even though I am such a mess," Lee Ha-neul, a rapper of the hip-hop trio DJ D.O.C. said during the show. "Otherwise, people would think that I am a failure."

But cultural shifts in attitude, beliefs and values have helped redefine the meaning of marriage and significantly reduced stigma associated with divorce.

An increasing number of people view marriage as a personal choice and a tool for happiness, away from the traditional belief that it is a lifelong commitment and the bedrock of society, which should be safeguarded no matter what. 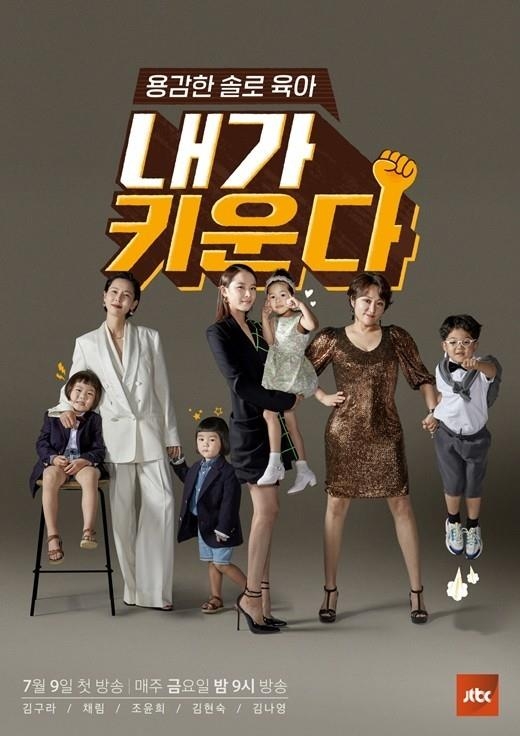 Changing beliefs about the idea of marriage did not come overnight.

A similar survey done a decade ago on 478 single men and 500 single women by the same company showed that 77 percent of the women thought it was fine to get divorced. Of the respondents, 55.6 percent said one should divorce a spouse if he or she is constantly feeling unhappy, while 23 percent said one should not. The percentages among male respondents were 43.7 percent and 40.6 percent, respectively, showing men were more reluctant to end their marriages.

On "gray divorce," referring to couples divorcing later in life, 23.8 percent of the women said they would discourage their parents from getting divorced, while the figure was 45.8 percent among the men.

"We only made a different choice under various circumstances. I don't think we have failed just because we got divorced," Sunwoo Eun-sook, the 61-year-old actress who separated in 2007 from Lee Young-ha, her actor husband of 26 years, said in one episode of "We Got Divorced."

"I have been always hopeful about what life has to offer and tried to be thankful for everything. I am happy now," she said. "I really am." 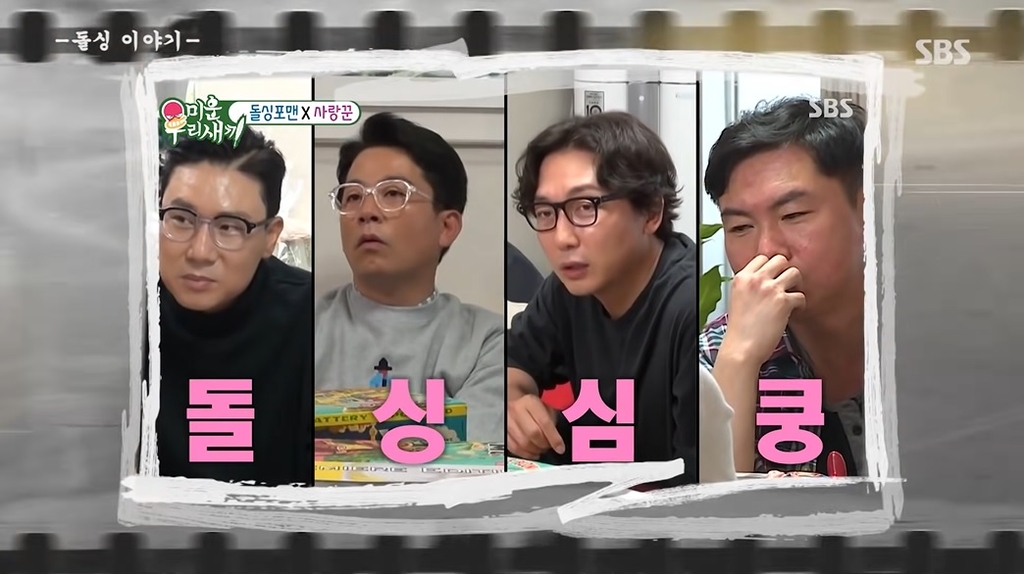 Since the program, more reality TV shows have started to focus on the life of the divorced and their families: JTBC's "Naeki" about three single celebrity mothers, SBS' "Dolsing Four Men" about four divorced men pursuing friendship and finding humor in life, and MBN's "Dolsingles" about divorced singles searching for new love and a fresh start.

Coined around 2004, dolsing is a new Korean word for a divorced person. The word is the combination of "dol," which means coming back in Korean, and the English word single.

Last year, 214,000 couples tied the knot, while 107,000 couples called it quits and went separate ways, according to Statistics Korea.

Among the divorce cases, splitting up late in life after living more than 20 years together took up the biggest portion at 37.2 percent, followed by divorce after marrying for four years or shorter at 19.8 percent. Divorced couples remained married for an average of 16.7 years.

When it comes to fighting the divorce stigma and showing greater acceptance of different types of families, the year 2021 might mark a notable year in the country's entertainment industry.

"Even though there are so many single parents out there, people still seem to only value a traditional family," Kim Na-young, a TV personality who raises two young boys on her own, said during a press conference of the reality show "Naeki." The title is the abbreviation of Nae-ga-ki-un-da, meaning I raise (my kids) alone in Korean.

"I decided to star in the show to show family diversity and to give my support to other single parents like myself," she said.

"Dolsing Four Men," a spin-off of SBS TV's long-running popular show "My Little Old Boy," is a more light-hearted program, filled with self-deprecating jokes and humorous banter about being divorced and single.

"You stink because no one tells you to take a shower anymore," Lee Sang-min, a rapper and a TV personality, snapped at comedian Kim Jun-ho.

The four men, in their 40s and 50s, constantly take jabs at each other, all the while showing brotherly affection and support, by, for example, going to see a doctor, cooking meals and getting marriage counseling together. 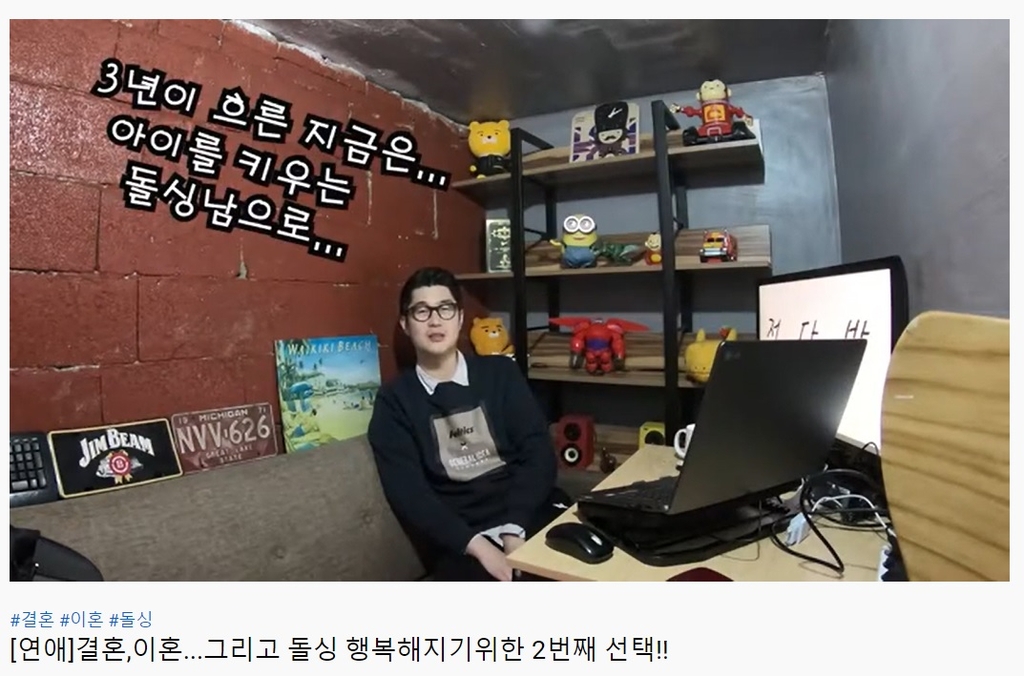 But not everyone is a fan of such reality shows.

Jung Yong-sun, the single father of a 7-year-old son and a YouTuber giving advice on relationships, said he was worried if those programs could make people not take divorce seriously.

"People decide to divorce because they don't know when -- if ever -- their suffering will come to an end," he said, adding, "I might have hung in there if I had known for sure that things would get better over time."

The 35-year-old said he had no choice but to get divorced as there seemed no end in sight to the endless arguments and bickering with his ex-wife.