According to the poll conducted by Realmeter on 2,031 voters nationwide from Sunday-Monday, 42.1 percent of the respondents said they will vote for Yoon of the main opposition People Power Party (PPP) in a hypothetical two-horse race against Gyeonggi Gov. Lee Jae-myung, the front-runner among Democratic Party (DP) candidates.

In a two-way race in the previous Realmeter survey two weeks ago, Yoon led Lee with a 2.7 percentage-point margin.

When pitted against Rep. Lee Nak-yon, former chairman of the DP, Yoon was ahead 43.7 percent to 33 percent.

Yoon was also leading the overall poll that encompasses all declared and prospective presidential contenders, by garnering 26.3 percent of support. It marks a fall of 1.2 percentage point from the previous survey.

The Gyeonggi governor, with 25.9 percent, was following Yoon by a razor-thin margin of 0.4 percentage point.

Third place went to Lee Nak-yon who had 12.9 percent, followed by Choe Jae-hyeong, former chief of the Board of Audit and Inspection, who is affiliated with the PPP.

The poll, commissioned by OhmyNews, has a 95 percent confidence level. 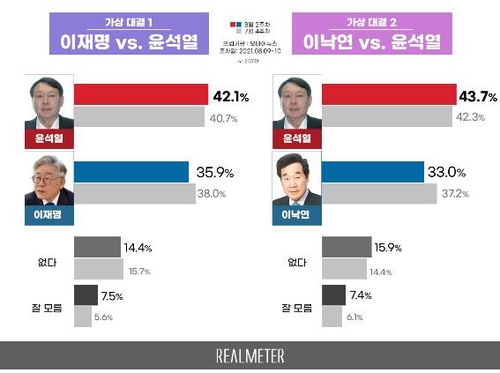