He will be the first foreign leader to visit here since the beginning of the COVID-19 pandemic.

The Kazakh president is scheduled to arrive in Seoul on Monday and have talks with Moon the next day on promoting substantive cooperation between the two countries, according to Cheong Wa Dae spokesperson Park Kyung-mee.

"Kazakhstan is our largest trading partner and investment destination in Central Asia, and also a key partner in the push for the New Northern Policy," she said at a press briefing. 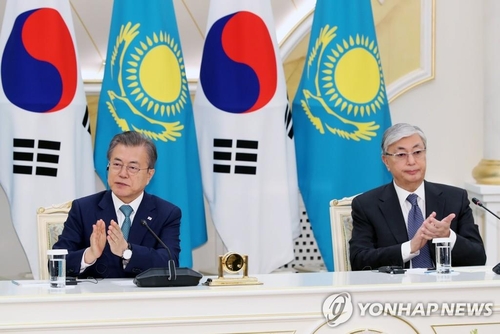 "They plan to discuss ways to expand substantive bilateral cooperation in various fields, such as transportation, infrastructure, construction, ICT, health care and the environment," Park said.

Among other items on the agenda are how to promote cultural and people-to-people exchanges, and strengthen partnerships on regional and global issues as the countries mark the 30th anniversary in 2022 of establishing diplomatic ties.

In addition, the remains of Hong Beom-do, a well-known Korean independence fighter during Japan's colonial rule from 1910-45, will be repatriated in connection with his trip.

Hong, who had served as general commander of the Korean independence army, died in Kazakhstan in 1943. Hong is especially famous for the victory of his independence troops in the Battle of Fengwudong against Japanese forces in Manchuria, China, in 1920.

Moon plans to send a special delegation there to bring the remains home this weekend, Park said. Hwang Ki-chul, minister of patriot and veterans affairs, is to lead the team.

The remains will be buried at Daejeon National Cemetery in Daejeon, about 160 kilometers south of Seoul, next Wednesday following an official mourning period.

Tokayev also will be the first Kazhak president to travel to South Korea in five years. He is reciprocating Moon's state visit to the Central Asian nation in April 2019.

He had planned to make a trip here in March last year, but it was postponed due to the coronavirus situation.