SEOUL, Aug. 12 (Yonhap) -- Seungri, the disgraced former member of K-pop boy band BIGBANG, was sentenced to a three-year prison term by a military court on Thursday on nine charges, including prostitution mediation and overseas gambling.

The Army's general military court in Yongin, south of Seoul, also ordered the immediate detention of the scandal-ridden celebrity, a 31-year-old whose real name is Lee Seung-hyun, and a forfeiture of 1.15 billion won (US$990,000).

Seungri has been on trial at the military court because he enlisted in the Army in March last year following his indictment in January that year on multiple charges, which also include operation of an unlicensed adult entertainment establishment and embezzlement. 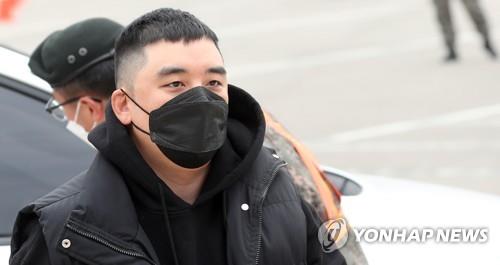 In January this year, Seungri was additionally charged with mobilizing gang members to threaten people he got into a fight with at a bar in 2015.

"The defendant (Seungri) arranged sexual favors for foreign investors on many occasions in collusion with his business partner Yoo In-suk and gained benefits as a result. His crime of commercializing sex and violating our traditional custom has caused no small harm to our society," the military court said.

"Gambling by an entertainer, who receives public attention, has a large ripple effect, such as undermining the sound work ethics of our society," it said, adding the nature of his other crimes is also grave.