Ri made the remarks in a rare statement released on the ministry's website in celebration of the 95th birth anniversary of the late former Cuban leader Fidel Castro.

"We resolutely condemn and reject the latest anti-government protest that occurred in Cuba, as it is an anti-revolutionary move taken by reactionaries at the urging and backing of the United States in an attempt to obliterate the cause of Comrade Fidel Castro Ruz and to bring down socialist Cuba," Ri said.

Ri also expressed support and solidarity to the Cuban people in their fight against the current challenges, as well as "high respect" for making "vigorous efforts for socialist construction."

This marks the first time Ri has released a statement on the Cuban situation, though the ministry has published several articles blaming the U.S. for causing the recent instability.

Earlier in the day, the Rodong Sinmun, the official newspaper of the ruling Workers' Party, carried an editorial stressing that the North and Cuba have maintained "special comrade relations" in the struggle for socialism.

"Our people will always stand in line with our Cuban brothers in the struggle to advance socialism with our banners for the revolution held high and use our best efforts to advance the friendly partnership between the two countries," the paper said.

The paper also claimed that the recent anti-government demonstrations in Cuba are a challenge by "hostile forces" to wipe out Castro's achievements and destroy socialism in the country.

North Korea and Cuba have maintained close relations since establishing diplomatic ties in 1960.

Pyongyang has been seeking to maintain closer ties with its traditional allies amid an impasse in nuclear negotiations with Washington. 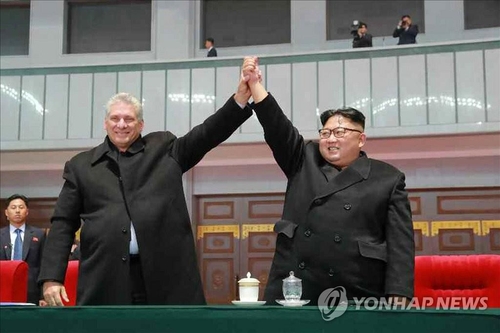