The shipment departed from Tennessee on Saturday (U.S. time) and landed in Incheon International Airport, west of Seoul, at around 12:47 p.m., according to the officials.

The newly arrived vaccines will be administered first to prisoners and sailors from Aug. 23 after undergoing a safety assessment.

They do not require secondary shots for inoculation, unlike other vaccines.

The delivery marked the second provision by the U.S., following the June 5 shipment of 1.01 million Janssen doses, twice the amount originally promised during the summit between Presidents Moon Jae-in and Joe Biden in May.

The previous Janssen shots were given mostly to soldiers.

On Saturday, the U.S. Embassy in Seoul said in a press release that the vaccines are "for use in the general population as part of the international partnership for fighting the pandemic" and added that their provision reflected South Korea's "ability to effectively utilize those vaccines."

South Korea has seen an upsurge in coronavirus cases recently, with daily infections staying around 2,000 despite the highest level of social distancing curbs in place.

Earlier, President Moon said that he will push to complete the second dose of COVID-19 vaccines for 70 percent of the population by October, adding that the government will further raise its target vaccine administration rate. 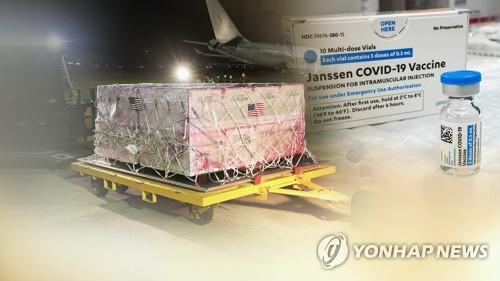