SEOUL, Aug. 15 (Yonhap) -- South Korea and the United States will kick off a major summertime combined exercise in a scaled-back manner on Monday, the Joint Chiefs of Staff (JCS) announced, after North Korea vowed to punish the two countries when they started a preliminary training last week.

The nine-day computer-simulated Combined Command Post Training will not include outdoor drills, and the size of troops involved will be minimized in consideration of the virus situation, the JCS said in a statement.

The decision to go ahead with the exercise was made in consideration of "the COVID-19 situation, the maintenance of the combined defense posture and the diplomatic efforts for the denuclearization of the Korean Peninsula and the establishment of peace," the JCS said.

When the South and the U.S. started a preliminary exercise on Tuesday, the sister of North Korean leader Kim Jong-un blasted the drills as an "unwelcoming act of self-destruction for which a dear price should be paid."

Kim Yong-chol, a senior North Korean official handling inter-Korean relations, also issued a statement the following day pledging to make the two countries "realize by the minute what a dangerous choice they made and what a serious security crisis they will face because of their wrong choice."

Pyongyang has long railed against such exercises, denouncing them as a rehearsal for invasion, though Seoul and Washington have stressed that they are regular ones that are purely defensive in nature.

"It is an annual command post exercise centered around computer simulations that is defensive in nature," the JCS said.

Since Tuesday, North Korea has been refusing to answer the South's regular phone calls via liaison and military hotlines in an apparent protest against the military exercise.

The lines were restored late last month following a yearlong severance after President Moon Jae-in and the North's Kim agreed to improve their chilled ties amid little progress in nuclear negotiations.

During the nine-day exercise, some of the drills will be conducted under Full Operational Capability (FOC) conditions "to maintain the progress on the conditions-based transition of the wartime operational control (OPCON)," according to the JCS.

The two countries have been working for the OPCON transfer of South Korean forces from Washington to Seoul, though no specific deadline has been set.

An FOC test is a crucial step to check if South Korea is on course to meet conditions required for retaking the OPCON.

It was supposed to be held last year as part of the allies' combined training, but the two countries failed to do so due to the COVID-19 situation. 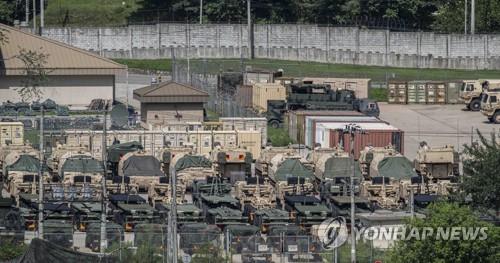