SEOUL, Aug. 17 (Yonhap) -- Tourist arrivals in South Korea plunged more than 95 percent in the first half of the year due to global travel curbs amid the coronavirus pandemic, data showed Tuesday.

The data from the state-run Korea Tourism Organization (KTO) showed 73,000 foreign tourists visited South Korea in the January-June period, down 95.4 percent from a year earlier.

The figure accounted for 17.5 percent of all foreigners who visited South Korea in the six-month period.

In particular, it was much fewer than the 208,000 crew members of foreign flights and ships, who arrived in the country in the first half. 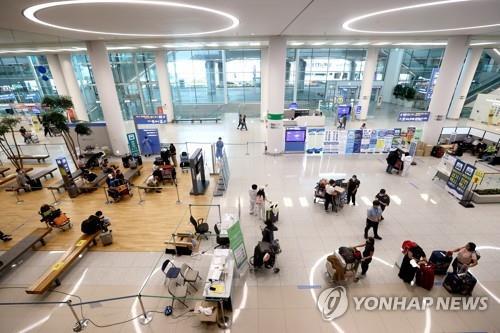 During the same period a year earlier, 1.59 million foreign tourists visited South Korea, or 8.6 times the number of crew members of foreign flights and ships.

The tumble in the first-half number of foreign tourist arrivals was attributed to travel restrictions across the globe, despite increasing vaccinations in many countries.

U.S. tourists to South Korea were the largest number at 25,116 in the first half of the year, which was down nearly 70 percent from a year earlier.

Industry sources voiced concern that the number of foreign tourist arrivals is unlikely to take a turn for the better for the time being due to the recent resurgence of COVID-19 infections worldwide.

South Korea requires all arrivals to self-quarantine for two weeks in an effort to curb the spread of the novel coronavirus.
(END)