SEOUL, Aug. 17 (Yonhap) -- The leaders of South Korea and Kazakhstan agreed during their summit talks here Tuesday to deepen and expand their "strategic partnerships" in various sectors, including those related to the fourth industrial revolution, public health, space exploration and climate.

President Moon Jae-in noted that his Kazakh counterpart Kassym-Jomart Tokayev has become the first foreign leader to visit South Korea since the outbreak of the COVID-19 pandemic. He arrived here Monday for a two-day state visit to reciprocate Moon's trip to the Central Asian nation in April 2019.

"I hope that relations between the two countries will further develop, like those of brother ones," Moon said at the outset of the Cheong Wa Dae summit. 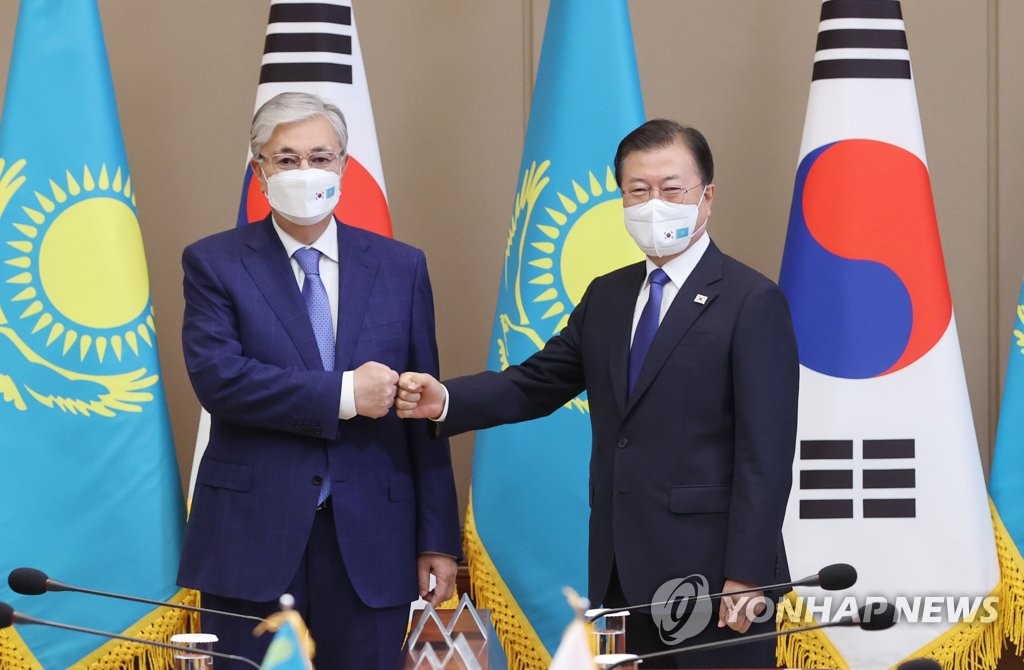 He pointed out that Kazakhstan is South Korea's largest trading partner in Central Asia, with two-way trade volume reaching an all-time high of US$4.2 billion in 2019.

"Kazakhstan is an important partner in our government's New Northern Policy, and the bilateral relationship has great potential to develop further in the future," Moon added.

He expressed his gratitude to Kazakhstan for its cooperation in the repatriation of the remains of Hong Beom-do, a revered Korean independence fighter who died there in 1943.

The remains were brought home on Sunday as South Korea commemorated the anniversary of its liberation from Japan's 1910-45 colonial rule.

In response, Tokayev said his country has "special interest" in South Korea's cutting-edge technologies and countermeasures against the coronavirus.

"I think we have to continue projects to attract investments from the Republic of Korea," he said in his opening remarks, using South Korea's official name. 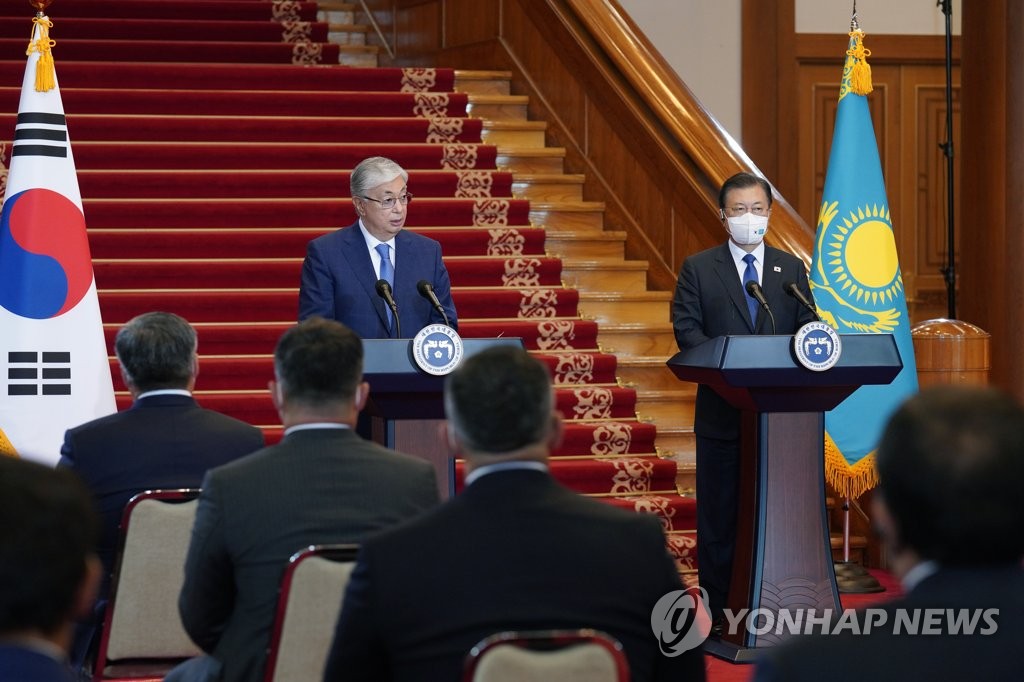 They agreed to strengthen cooperation for harmonious synergies between South Korea's New Deal policy and Kazakhstan's 2025 national development plan, according to the document. They agreed on the need to share experience in such fields as the fourth industrial revolution and commercialization of 5G wireless communication networks.

He said that Kazakhstan has plenty of rare earth materials and hopes for cooperation with South Korea on geological exploration and electric vehicles. Moon said such natural resources are needed for the production of batteries and other products and that the two countries can create synergy via relevant cooperation. 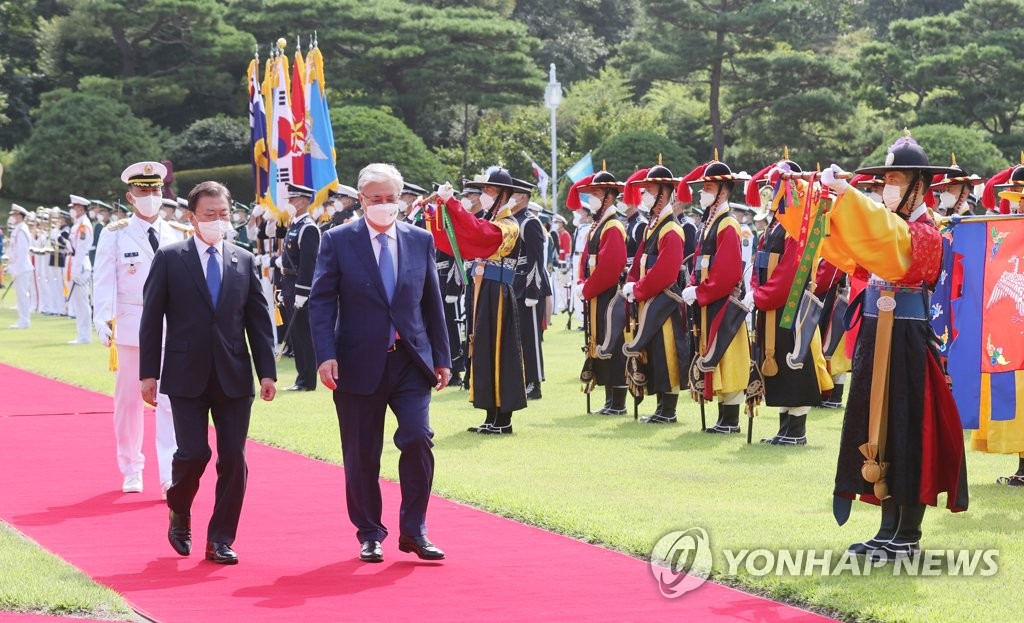 Kazakhstan reaffirmed its unswerving support for South Korea's efforts to move forward the Korea peace process and agreed to closely cooperate for the early resumption of dialogue aimed at achieving peace and stability on the peninsula.

"The two sides stressed the importance of dialogue, engagement and cooperation between the two Koreas," the joint statement read.

They also agreed to work together to deepen "friendship and mutual understanding" among the people of both nations via various programs for the 2022 Year of Mutual Culture Exchange to commemorate the 30th anniversary of establishing bilateral diplomatic ties.

After their talks, the presidents attended the signing ceremony of the memorandums of understanding (MOUs) on strengthening cooperation on trade, water resource management and documentary heritage management as well as establishing an economic cooperation committee and preserving what used to be a graveyard for the late general Hong in the Kazak region of Kyzylorda. 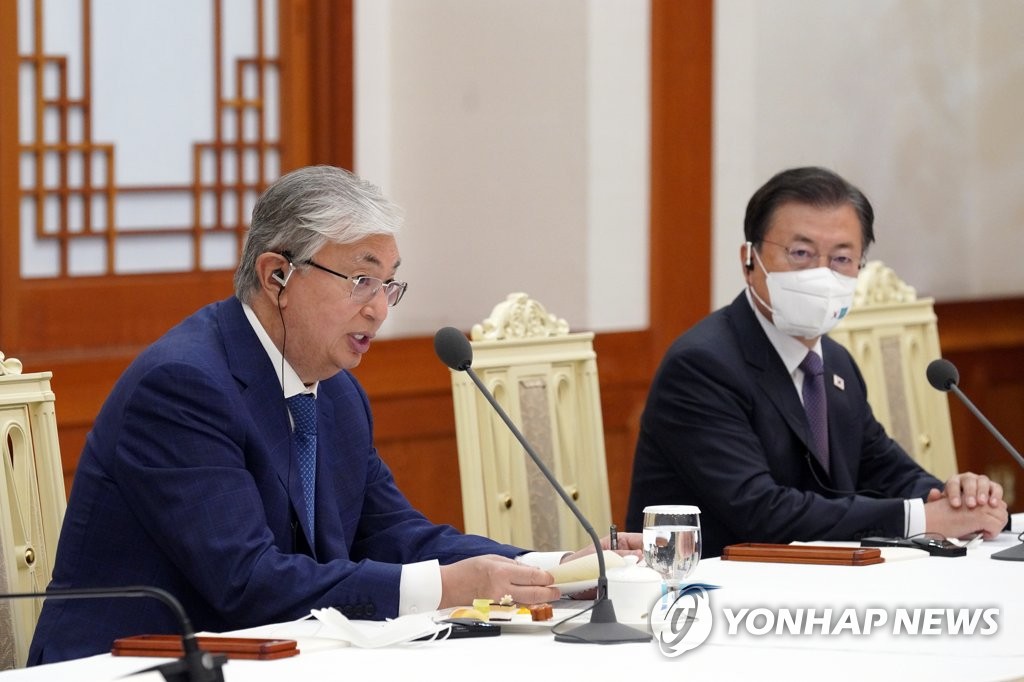 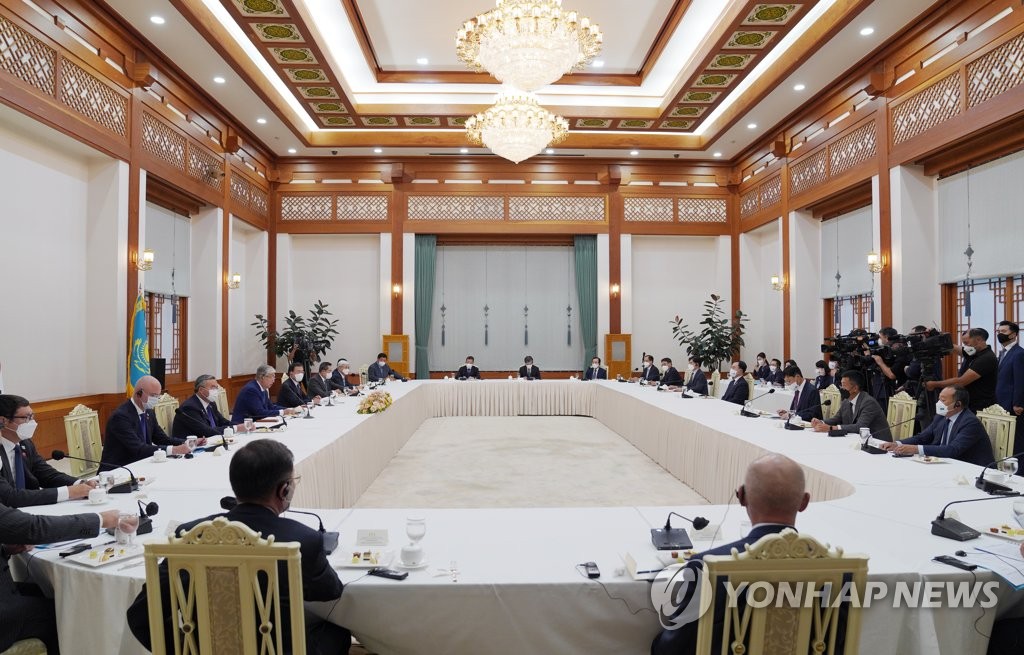