SEOUL, Aug. 17 (Yonhap) -- With their clubs having completed the first week of action back from the Tokyo Olympics, members of the South Korean national baseball team are still trying to pick up the pieces in light of a disappointing, fourth-place finish.

Some have built on their successful individual performances, while others who excelled at the Olympics haven't been able to sustain that level of play back in the Korea Baseball Organization (KBO).

And a few players haven't even played since returning home from Japan.

South Korea had 13 pitchers and 11 position players at the Olympics, all from the KBO. Among them, SSG Landers second baseman Choi Joo-hwan has been sidelined since coming home, while pitchers Cha Woo-chan (LG Twins), Won Tae-in (Samsung Lions) and Cho Sang-woo (Kiwoom Heroes) have also been out of action.

Choi had been dealing with some hamstring issues before the Olympics and only had four pinch-hit at-bats in Japan, the fewest on the team. 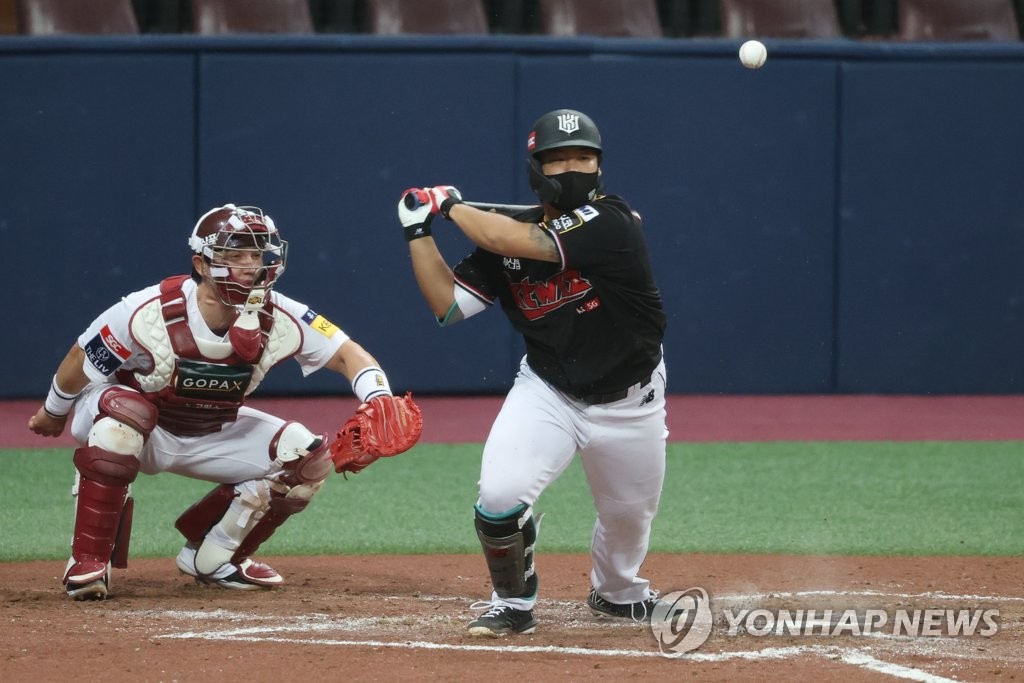 Choi is scheduled to undergo further tests on his left hamstring this week. The Landers plan to keep him in the minor league for some rehab games before calling him back up to the main squad, and an August return is unlikely for the hard-hitting second baseman.

The Landers won just one out of their five games last week and scored two or fewer runs in three of them.

The three aforementioned pitchers aren't injured, but their clubs have given them a breather. Cho, in particular, needed to put his feet up for a few days after throwing a whopping 146 pitches in eight innings across a team-high six appearances.

The Heroes did just fine without Cho last week, winning five out of six games without their closer.

The Lions went 1-4 last week without Won. They had four other Olympians, and none helped the club's cause in their return to action.

Closer Oh Seung-hwan, who imploded in allowing five runs in the eighth inning of a 10-6 loss to the Dominican Republic in the bronze medal game, has faced just one batter in the KBO since his return. Kang Min-ho, a backup catcher at the Olympics who batted 1-for-7, was hitless in three at-bats Wednesday, his lone appearance back in the KBO so far. Oh Jae-il, who lost his starting first baseman job at the Olympics and batted just .211 with zero extra-base hits, has managed just three singles in five games since rejoining the Lions.

Park Hae-min, who led all regulars with a .440 batting average and seven runs scored at the Olympics, hasn't been the same. He only batted 3-for-17 with six strikeouts last week.

Another player who has been the shell of his Olympic self is LG Twins' outfielder Kim Hyun-soo.

Kim was the South Korean captain and also its best player at the Olympics, leading the team with three home runs, seven RBIs and a 1.271 on-base plus slugging percentage (OPS). But he batted just 2-for-16 last week and was held out of the starting lineup Sunday after showing symptoms of a stomach flu.

On the flip side, two players who bore the brunt of the criticism at the Olympics have been trying to turn things around with their bats.

Kang Baek-ho of the KT Wiz is keeping his pursuit of the elusive .400 batting average alive, after going 9-for-20 in his first six games back from the Olympics. He has at least a hit in every game since his return.

During the bronze medal game, Kang became the poster child for a new generation of ball players accused of being spoiled while having no heart. Kang was caught on television camera chewing gum with particular gusto while wearing an uninterested expression, after the Dominicans took the lead in the eighth inning. Former major league pitcher Park Chan-ho, working as a color analyst for KBS, blasted Kang on air for not seeming to care about the result, and the frustrated fan base picked up on the cue and ran with the narrative. 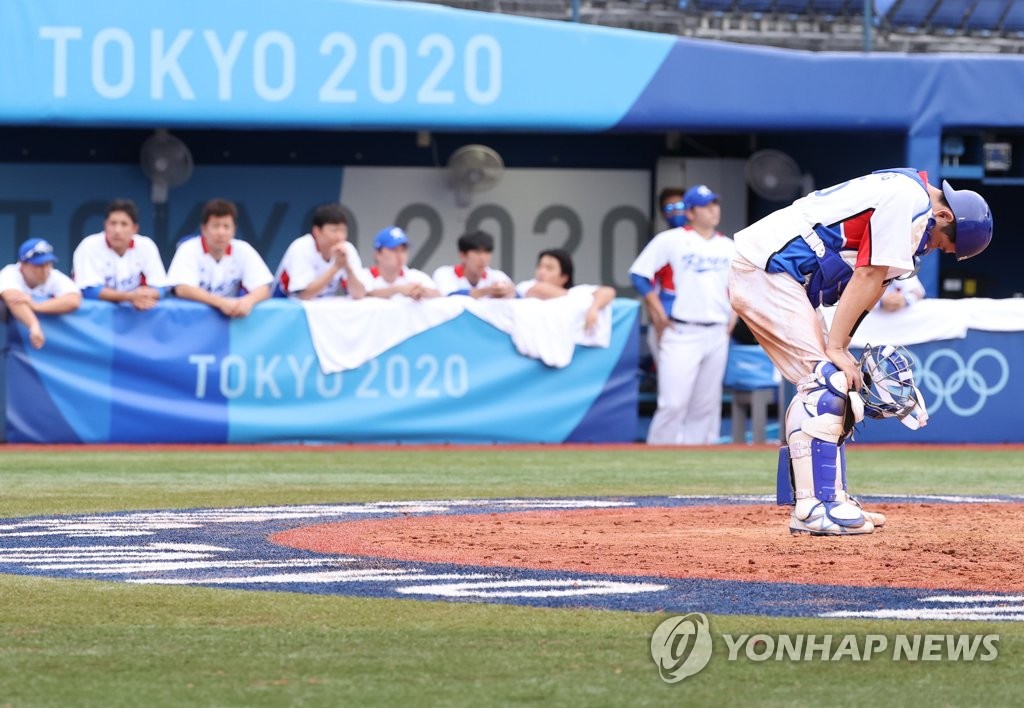 Kang, who is currently hitting .399, has since apologized for his behavior.

At least Kang batted .308 with four RBIs at the Olympics. NC Dinos' catcher Yang Eui-ji was invisible in Japan, where he batted only 3-for-22 with two RBIs and one extra-base hit.

But the perennial MVP candidate in the KBO is at it again, putting up a pair of three-hit games as part of a 9-for-20 week. He is second behind Kang in the batting race with a .356 average.

Kiwoom outfielder Lee Jung-hoo didn't quite live up to hype at the Olympics with a .241 batting average. He was rested for the Heroes' first game back in action last week and only came off the bench as a ninth-inning defensive replacement in the next one. Lee then went on to bat 6-for-14 in the team's next three games.

On the mound, Kia Tigers' 19-year-old starter Lee Eui-lee held the Landers to a run on three hits in six strong innings Saturday. He led South Korea with 18 strikeouts in 10 innings at the Olympics, one of the few bright spots for the national team. 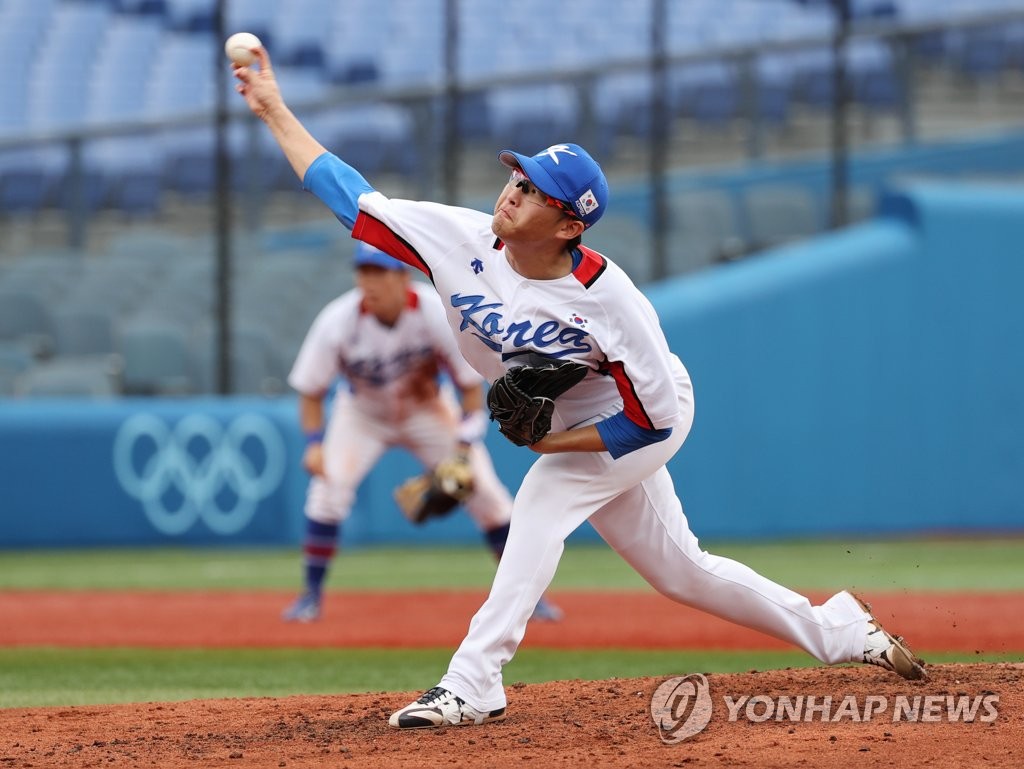 Lotte Giants' right-hander Park Se-woong nearly threw his second complete game of the season Friday, when he tossed eight shutout innings against the Twins. He only gave up one hit and struck out five, after getting his first taste of the Olympics with four relief appearances.

Choi Won-joon of the Doosan Bears looked shaky at the Olympics and suffered through his shortest started of the season Friday versus the Heroes. He lasted just 3 1/3 innings while giving up six runs -- three unearned -- and later complained of right shoulder discomfort.

Hanwha Eagles' starter Kim Min-woo, who surrendered two first-inning home runs to the Dominican Republic, is still trying to get back on his feet. He was knocked around for six hits and three runs in 3 2/3 innings against the Dinos on Friday. It was Kim's shortest outing since May 9. 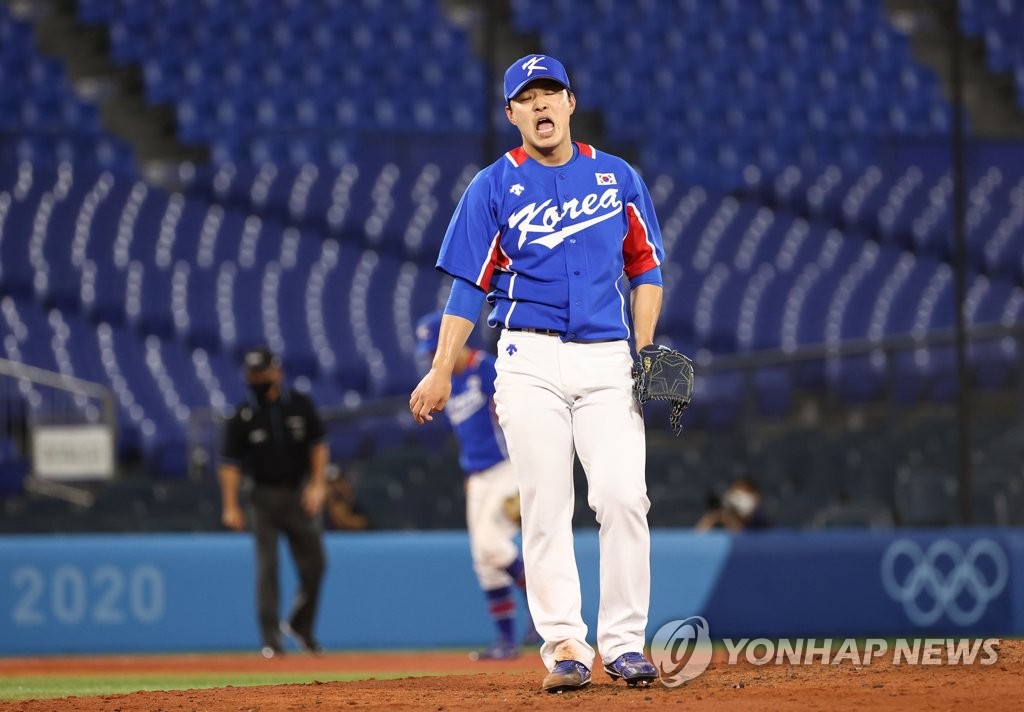