SEOUL, Aug. 19 (Yonhap) -- More than one in 10 new coronavirus cases reported in South Korea over the past two weeks were foreigners living in the country, health authorities here said Thursday.

A total of 1,379 foreign residents living in the country were confirmed to be infected with the COVID-19 virus between Aug. 1 and Saturday, accounting for 11.1 percent of the total number of new cases, according to the Korea Disease Control and Prevention Agency (KDCA). 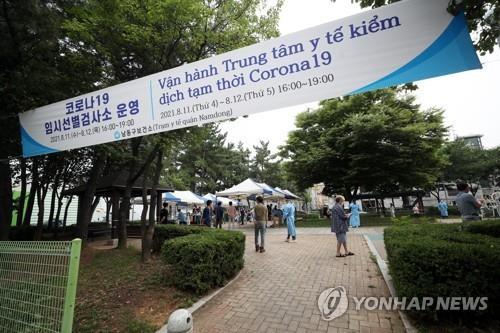 The rate is much higher than the percent of foreigners living in the country, which comes to 3.8 percent, the authorities said.

Of the total, 959 were from the wider capital area -- Seoul, Incheon and Gyeonggi Province -- and 420 were from the other parts of the country, the KDCA said.

The KDCA said most of them were in their 20s or 30s and from Asian countries, including Vietnam, China, Uzbekistan and Thailand.

The number of cluster infections linked to foreign residents also sharply increased from just two in June to 42 in July and 22 in August, the KDCA said.

On Thursday, the country added 2,152 more COVID-19 cases, topping 2,100. It is the second-largest number recorded here during the COVID-19 outbreak, following an extended weekend.

1 in 10 new COVID-19 cases were foreign residents in past 2 weeks: KDCA

1 in 10 new COVID-19 cases were foreign residents in past 2 weeks: KDCA