ROME, Aug. 21 (Yonhap) -- Pope Francis on Saturday thanked the South Korean Catholic community for sharing donations to provide COVID-19 vaccines to poor countries and prayed for the continued efforts toward the reconciliation of the Korean Peninsula.

In a special papal message delivered by South Korean archbishop Lazzaro You Heung-sik, Pope Francis praised the generosity of Korean Catholics' vaccine-related donations recently delivered to the Vatican, saying, "This is a strong invitation for a greater commitment to the cause of the least of the world." 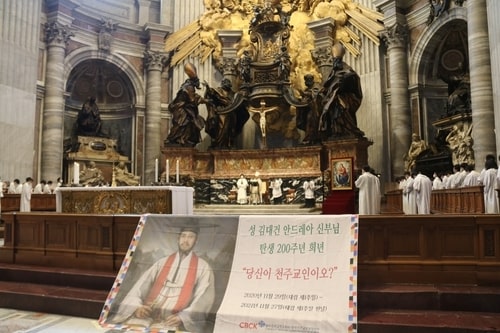 The pope also urged those working for the reconciliation between South and North Koreas to "continue with renewed commitment to be good peacemakers" while encouraging them to engage in respectful and constructive dialogue for a bright future.

The message was shared on the occasion of a memorial Mass celebrating the 200th birth anniversary of St. Andrew Kim Tae-gon, the first Korean native Catholic priest, at St. Peter's Basilica at the Vatican.

Born in 1821, Kim was ordained as a priest in 1845 during the late Joseon era in Shanghai, China. He was persecuted and executed for practicing Christianity the following year at the age of 25. Kim was canonized as a saint by Pope John Paul II in 1984.

Pope Francis said St. Andrew Kim, along with his martyr companions, "showed with joyful hope that good always prevails, because God's love wins out over hatred."

The event marked the first Mass that You has officiated as the prefect of the Congregation for the Clergy of the Holy See since taking office earlier this month.