The Korea Minting, Security Printing & ID Card Operating Corp. (KOMSCO) revealed the medals -- two gold and one bronze paperweight -- themed on the Catholic saint during the bicentenary ceremony held at Kim's hometown of Dangin, about 120 kilometers south of Seoul, from Aug. 14 to Sunday.

A limited 200 and 1,000 pieces of the bigger gold medal and the smaller one, respectively, were designed to shed new light on the Solmoe shrine, Kim's birthplace, and to give financial support to the Korean Catholic's vaccine sharing campaign, KOMSCO said.

At the same time, the company also donated 50 million won (US$42,600) to the Vatican through the Catholic Diocese of Daejeon to help countries facing difficulty in procuring vaccines. 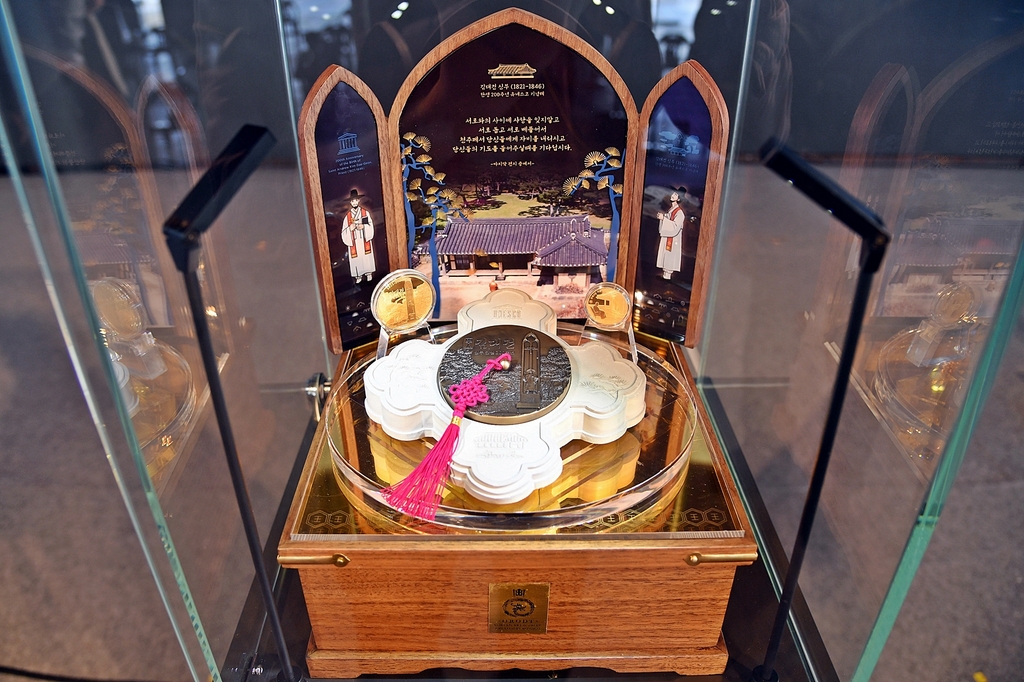 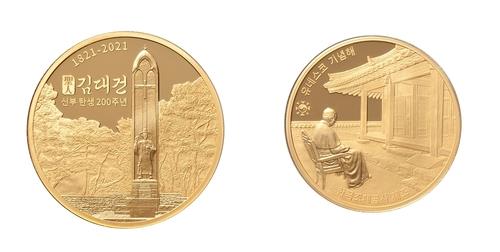 The gold medals depict the statue of Kim and the pine tree colony at the Solmoe shrine, as well as Pope Francis' visit to the shrine in 2014.

The bronze paperweight has the same frontal design as the gold ones and an illustration of the panorama of the shrine, where Kim's family lived over four generations, producing 11 Catholic martyrs.

The latest set of medals are available for purchase at KOMSCO's flagship store in western Seoul and online shops, including those of KOMSCO (www.koreamint.com) and Hyundai Department Store (www.thehyundai.com), until Sept. 3.

They are the second edition of Kim's commemorative medals by KOMSCO, following the first one released in November last year. A set of the first version -- one gold, silver and bronze each -- was also handed over to Pope Francis through South Korean archbishop Lazzaro You Heung-sik in April.

"It is meaningful that we present the second edition of the commemorative medals at his birthplace," Bahn Jahng-shick, the CEO of the minting agency, said. "Part of the proceeds will be used to support a COVID-19 vaccine sharing campaign to practice Kim's love for mankind."