SEOUL, Aug. 24 (Yonhap) -- South Korea and China launched a committee on the "future-oriented" development of their relationship Tuesday, ahead of the 30th anniversary next year of the establishment of their diplomatic ties.

The launch of the Committee for Future-Oriented Development of Korea-China Relations came as Seoul seeks to maintain close ties with Beijing despite an intensifying Sino-U.S. rivalry injecting complexity into its diplomacy toward the major Asian power.

The committee was formed based on last year's agreement between the two countries to use the dialogue platform to map out a road map for the development of bilateral relations in the next three decades. 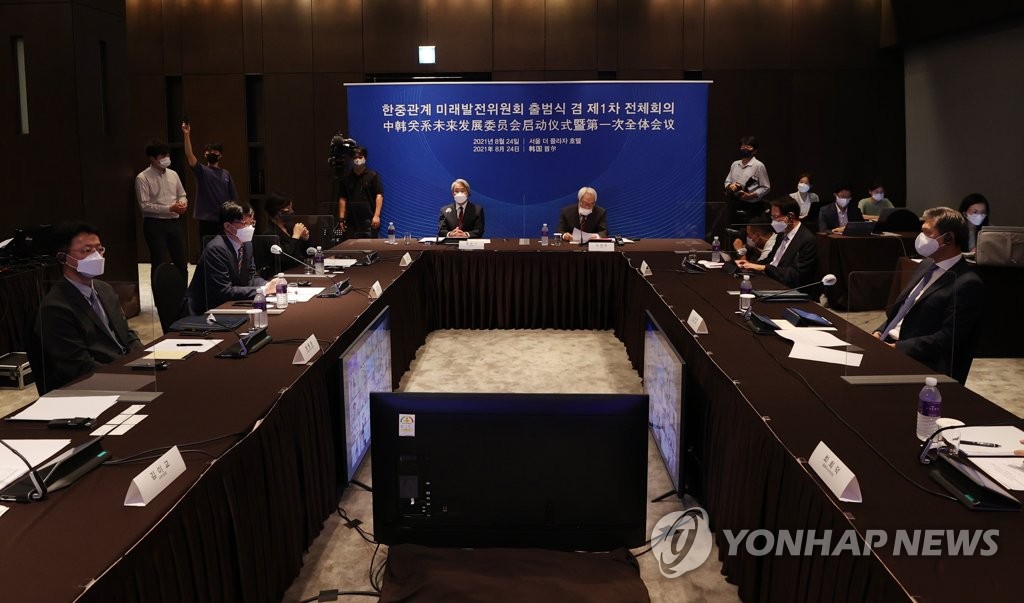 In a video congratulatory message at its inaugural session, Foreign Minister Chung Eui-yong voiced hope for continued cooperation with Beijing in advancing Seoul's drive for lasting peace on the Korean Peninsula.

"The Republic of Korea and China -- as core partners in the journey for the policy to realize denuclearization and lasting peace on the peninsula -- have been actively cooperating with each other," Chung said.

"Going forward, we will also closely cooperate for progress in the peninsula peace process, and by extension for peace and stability in Northeast Asia," he added, calling the two countries the "closest and important neighbors."

Chinese Foreign Minister Wang Yi also delivered a video message, noting the fast-paced development of the two countries' relations has not only benefited their peoples but also contributed to regional and world peace.

"In the midst of the complex international situation, strengthening friendly, cooperative relations between South Korea and China befits the era, public sentiment and the fundamental interests of the two countries," he said.

The committee of government officials and experts consists of the subcommittees on future planning, politics and diplomacy, economy and commerce, and society and culture, in an apparent reflection of the two countries' hopes to deepen relations on various fronts.