SEOUL, Aug. 25 (Yonhap) -- The nominee for South Korea's financial regulator said Wednesday that it may be difficult to recognize cryptocurrency as a financial asset in light of international trends.

"I understand that the Group of 20, the International Monetary Fund, other international agencies and a considerable number of experts find it difficult to see virtual currencies as a financial asset, and think they could not function as a currency," Koh Seung-beom, the nominee for the Financial Service Commission (FSC), said in a meeting with journalists.

His comment came as South Korean investors have been heavily buying virtual currency, considering it as a lucrative asset amid the coronavirus pandemic.

More young people have been investing in cryptocurrencies, anticipating higher returns, with some saying they cannot buy homes solely with their incomes amid skyrocketing home prices. 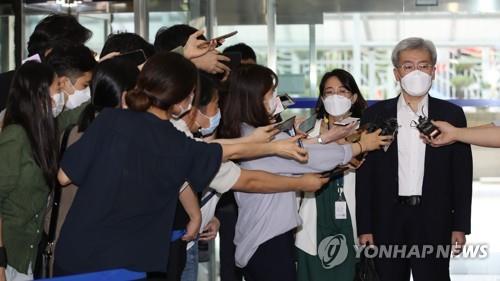 Koh reiterated his earlier commitment to make sure financial authorities put the top priority on curbing a sustained increase in household debt, which some experts say is a time bomb for Asia's fourth-largest economy.

"The FSC will push ahead with existing anti-debt measures and come up with additional steps, if needed, by mobilizing all available policy means," he said.

An excessive increase in household credit could lead to the creation and collapse of a bubble, which could undermine the soundness of the country's financial industry and have a negative impact on the real economy, he added.

South Korea's household credit reached a record high of 1,765 trillion won (US$1.52 trillion) as of end-March, up 9.5 percent from a year earlier, according to central bank data.

In April this year, the FSC announced a set of measures to slow the growth of household debt by expanding tougher rules to more mortgage borrowers.
(END)