SEOUL, Aug. 25 (Yonhap) -- Unification Minister Lee In-young called on Russia to play a "constructive role" in advancing the peace process on the Korean Peninsula during his talks with Moscow's top nuclear envoy, his office said Wednesday.

Lee also stressed that the peninsula is at a critical turning point as he met Deputy Foreign Minister Igor Morgulov, who doubles as Russia's envoy for North Korean issues.

Morgulov told Lee that Russia will play an active role for peace and prosperity on the peninsula and stressed the economic and political significance of trilateral cooperation with the North, the ministry said.

He also held a meeting with Vice Unification Minister Choi Young-jun and discussed ways for cooperation to move the Korea peace process forward.

The two sides agreed on the importance of diplomatic efforts towards denuclearization and agreed to maintain cooperation and communication to bring lasting peace on the peninsula.

Morgulov was in Seoul this week for talks with South Korean officials to discuss bilateral relations and North Korean nuclear issues.

His visit here comes amid chilled inter-Korean relations after the North blasted the South and the United States for going ahead with their joint military exercise and warned of a "serious security crisis." 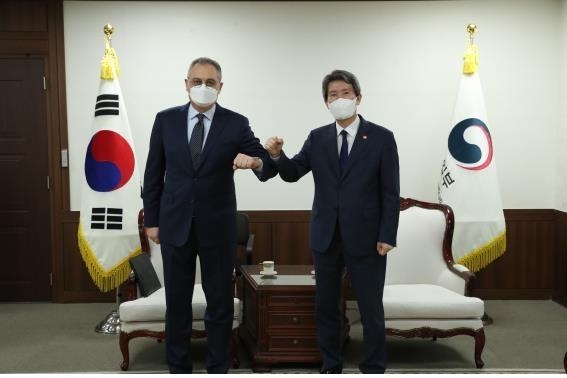