The monetary policy board of the Bank of Korea (BOK) voted to raise its key rate by 0.25 percentage point to 0.75 percent in this year's sixth rate-setting meeting.

It marked the first rate hike since May last year, when the BOK cut the key rate to a record low of 0.5 percent. It is also the first time since November 2018 that the BOK has lifted the key rate.

Raising the key rate, the BOK kept this year's growth outlook at 4 percent, while lifting its 2021 inflation outlook to 2.1 percent from 1.8 percent projected in May.

BOK Gov. Lee Ju-yeol said Thursday's rate-hike decision was not unanimous and one board member urged the central bank to freeze the key rate.

Lee also hinted that the BOK may again raise the key rate later this year or early next year, saying the central bank took the "first step" toward easing a buildup of financial imbalances.

Some analysts have expected the BOK to again lift the key rate before March next year, when Lee's second four-year term ends.

"Financial imbalances will not be resolved with this (rate hike). It will take a long time," Lee told reporters.

The rate-hike decision is expected to curb household debts and help stabilize home prices, Lee said, adding the level of the key rate is "low."

The BOK will closely monitor a recent surge in COVID-19 infections when it decides on future monetary policy, but the surge of infections is unlikely to significantly affect the trend of the economic recovery, Lee said.

"The Korean economy has continued its sound recovery. Although private consumption has somewhat slowed due to the coronavirus resurgence, exports have sustained their buoyancy and facilities investment has shown a robust trend," the BOK said in a statement.

"Going forward, the economy is likely to continue its recovery as private consumption is forecast to improve gradually, affected by the expansion of vaccinations and the execution of a supplementary budget, while exports and investment are expected to sustain their buoyancy," it said.

The BOK "will gradually adjust the degree of monetary policy accommodation as the Korean economy is expected to continue its sound growth and inflation to run above 2 percent for some time, despite ongoing uncertainties over the virus," according to the statement.

"In this process the board will judge when to further adjust the degree of accommodation while thoroughly assessing developments related to COVID-19, changes in the pace of growth and inflation, the risk of a buildup of financial imbalances and monetary policy changes in major countries," it said. 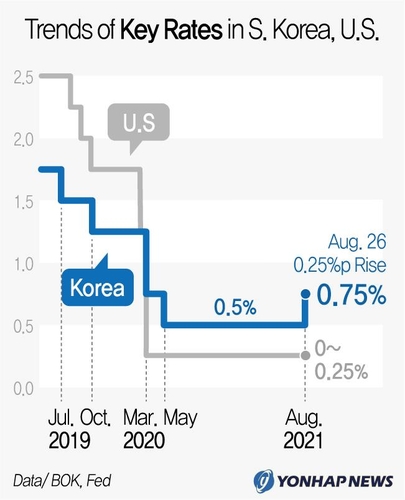 The BOK's decision came as the nation was fighting against its worst-ever COVID-19 outbreaks with daily new infections remaining above 1,000 for more than 50 days.

Exports jumped 40.9 percent on-year in the first 20 days of August on the back of robust demand for chips, autos and petroleum products.

Exports, which account for half of the economy, rose 29.6 percent on-year in July to a record high of US$55.4 billion in July, extending their gains to the ninth straight month.