U.S. Forces Korea (USFK) said in a release sent to Yonhap News Agency that it is aware of the Osan cluster infections and is "continuing to gather the facts and information surrounding these positive cases." 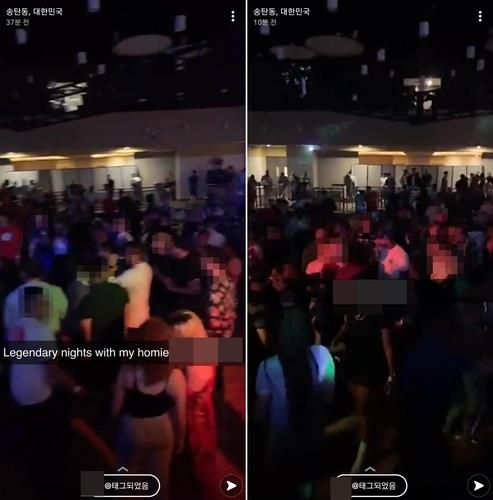 Meanwhile, the USFK said it will abolish the on-installation mask mandate for vaccinated members if the regions where their bases are located log a lower COVID-19 incidence rate than 50 infections per 100,000 people, a criteria set by the U.S. Defense Department.

Under the new guidelines set to be implemented on Saturday, vaccinated USFK members do not have to wear masks indoors and outdoors on their bases if their districts report infection rates lower than the criteria for seven straight days.

If the incident rate of a region is greater than or equal to 50, all members are required to wear masks indoors, regardless of their vaccination status, and travel to the region is prohibited with an exception of mission-essential and life-related activities, it added.

The new standard based on the incidence rate is in accordance with the U.S. defense department's substantial transmission threshold definition, the USFK said, adding the new guidelines will be applied to around 230 districts in South Korea.

"The USFK community must continue to follow all South Korean laws, rules and directives, including ROK social distancing levels and wearing masks when off USFK installations, and adhere to USFK core tenets both on and off-installation," USFK said in a release. ROK is the acronym of South Korea's official name, the Republic of Korea.